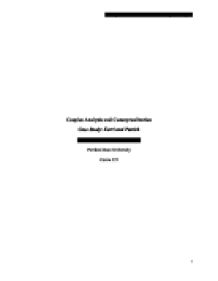 Couples Analysis and Case Study. Kerri, 26, and Patrick 29, have been dating for three years and have been living together for sixteen months.

Couples Analysis and Conceptualization Case Study: Kerri and Patrick Tammy D.Schamuhn, MS Candidate Portland State University Couns 575 Case Study Kerri, 26, and Patrick 29, have been dating for three years and have been living together for sixteen months. Kerri is employed as an elementary teacher, and Patrick works as an assistant manager of an automobile manufacturing company. Both individuals are extroverted with a very gregarious and outgoing way about them. They are both exceptionally social and enjoy spending time together by going to parties, traveling, and participating in outdoor activities such as snowboarding and camping. They are both very close with their families and each maintains close friendships outside of the relationship. They are a very physically affectionate couple, despite their presenting problems. That being said, the couple is experiencing a multitude of conflicts in their relationship. As of late there has been a dramatic rise in the amount of fighting and intensity of the arguments that occurs between the two. Fights are heated and the couple's subsequent interactions are becoming more dysfunctional. The couple is divided on several issues, thus, I will explore the presenting problems from the viewpoint of each person in the relationship and proceed to give my own conceptualization. Kerri From Kerri's point of view, the presenting problems between the couple include the complaint that Patrick is extremely moody and emotionally reactive. He quickly loses his temper and fails to empathize with her during conversations or fights. She experiences Patrick as reactive during arguments, and he overtylyto intimidates her with his size and physical strength (however, there is no record of violence with this couple). Kerri feels frustrated with Patrick and complains about how messy and disorganized he is. Particularly bothersome is his lack of help with household tasks. She also feels angry about his disinterest in activities that involve things she wants to do or involve her friends, but she believes she has been accommodating to him in this regard. ...read more.

Secondary emotions are responses to a primary emotion and are often what the therapist will see in his or her sessions with clients. These can include feelings of fear, anger, depression or anxiety. These secondary emotions need to be acknowledged by the therapist, but moreover, he or she must evoke the primary feeling if authentic experiences are to occur (Johnson, 2008). Pulling from past conversations with both Patrick and Kerri, it is probable that Patrick's expressed anger is a secondary emotion-a reaction to his fear of rejection. Similarly Kerri's frustration and anxiety about the relationship may be related to her primary feelings of rejection or a sense of injustice she feels is forming in the relationship. Interventions As a novice therapist who has not had any real clinical experience working with couples, I have decided to explore possible interventions that draw a parallel between two separate and distinct theoretical bases: that which is outlined by Bader and Pearson (1988) and the Emotionally Focused approach delineated by Sue Johnson. Bader and Pearson The following therapeutic objectives and strategies are adapted from the work of Bader and Pearson (1988). They are based both differentiating-differentiating couples and symbiotic hostile-dependant couples. I. Each partner will develop the ability to self-reflect and identify what they think, feel and desire II. Each partner will develop the ability to express to his or her partner what each thinks, feels and desires III. Each partner will develop the ability to respond effectively to one another's feelings in a way that supports increased differentiation in each other IV. The couple will develop the willingness to change the environment or provide support for the partner in facilitating the creation of what is desired. V. The couple will develop a fight style that is effective in their relationship. One that leaves both individuals feeling understood, even if not agreed with. VI. Establishment of boundaries merged in the symbiotic stage VII. ...read more.

Kerri: Yes. I love Patrick very much, but being with him can be really lonely sometimes. Tammy (therapist): Can you say that to Patrick. Can you tell him, "I am lonely and sad without you, but I am so afraid of you not being there, that I end up keeping you out." Reframing restructures the experiences in a way that draws attention to attachment fears. The following example highlights Patrick's aggressive behavior. Tammy (therapist): So when you feel Kerri isn't supporting you or hearing you out, you get angry with her. Your anger only gets worse when she withdraws from you and walks away. This makes you feel helpless and you start to worry that Kerri might be rejecting and abandoning you. Is that right? It's hard for you to feel helpless, so you continue to pursue her, worrying that if you don't you might lose her? One last technique utilized in EFT is enactments. This is used in the later stages of therapy where the therapist facilitates a "gradual restructuring and shaping of new interactional cycles. Partners act out specific moments in their cycle while reflecting on the attachment-related aspects of their experience. Slowing down partners' interactions, while having them directly express the attachment-related affect underlying their behavior, can heighten the thoughts and emotions that maintain the relational distress" (Johnson, 2009, p.271). Tammy (therapist): Patrick, can you turn to Kerri and tell her how afraid you are of losing her? How you pursue her when you're angry because you are actually scared she is rejecting you? Conclusions Bader and Pearson's model of therapy, Jung's analytical theory and Johnson's EFT approach all serve good theoretical frameworks and provide a rich and thoughtful approach to conceptualizing interactions within a relationship. Both Bader and Pearson's methodology and the EFT approach promote growth in the couple and allow for positive, corrective emotional experiences to occur. They allow the therapist to facilitate change to basic perceptions of the self and other, affective responding and interactional cycles. They both proficiently target change at both the individual and systems level, making them useful and practical in a clinical setting. ...read more.