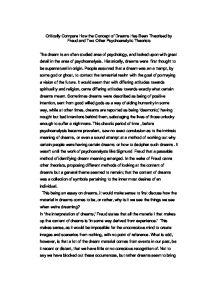 Critically Compare How the Concept of Dreams Has Been Theorised by Freud and Two Other Psychoanalytic Theorists The dream is an often studied area of psychology, and looked upon with great detail in the area of psychoanalysis. Historically, dreams were first thought to be supernatural in origin. People assumed that a dream was an attempt, by some god or ghost, to contact the terrestrial realm with the goal of portraying a vision of the future. It would seem that with differing attitudes towards spirituality and religion, came differing attitudes towards exactly what certain dreams meant. Sometimes dreams were described as being of positive intention, sent from good willed gods as a way of aiding humanity in some way, while at other times, dreams are reported as being 'daemonic,' having nought but bad intentions behind them, sabotaging the lives of those unlucky enough to suffer a nightmare. This chaotic period of time, before psychoanalysis became prevalent, saw no exact conclusion as to the intrinsic meaning of dreams, or even a sound attempt at a method of working out why certain people were having certain dreams or how to decipher such dreams. It wasn't until the work of psychoanalysts like Sigmund Freud that a passable method of identifying dream meaning emerged. ...read more.

This undistinguishable area of the conscious act is the area of symbols; symbols which appear to us in our dreams. The point at which Freud and Jung differ in opinion reveals itself when one reads into the methods each of the two psychoanalysts' uses to decipher the dreams themselves. Jung shies away from the overuse of free association when contemplating the content of dreams. An instance in Jung's past, being told of a friend who seemed to take an interest in the Cyrillic script he noticed while taking long journeys on railway systems, caused Jung to mistrust the free association method due to the fact that his friend seemed to draw associations from the random parts of script which lead him back to his complexes and neuroses, not supposed manifest content in dreams. Perhaps this meant that dreams were not that important in discovering the deeper mental processes? It is Jung's belief that to properly decipher the meaning of a dream, one must stick very closely to the features of the dream itself, or, in other words, Jung places much more importance on the manifest content of the dream than his mentor, Sigmund Freud, to quote Jung himself: 'only the material that is clearly and visibly indicated as belonging to the dream by the dream images themselves should be used for interpretation.' ...read more.

While often referring to Freud, none of the references have anything to do with dreams and when looked at from a comparative point of view, the reason could be a very simple and a very obvious one. If infants are the main subject of Klein's studies, then it would be impossible for Klein to sit the infant down and question it on the content of its dreams. At such a young age, most of Klein's subjects would not even be able to speak! Even so, Klein builds, in her work, a very thorough and complete model of the conscious and unconscious mind, and this takes away from the literature on dreams in such a manner that might render them slightly pointless. If no dreams have to be studied at all to gain enough knowledge on the mind to accurately explain neuroses, then did Freud and Jung waste their time picking away at the various symbols and signs in the unconscious storylines of themselves and others? Perhaps. The theorists looked at in this essay provide very diverse and very interesting points of view on the subject of dreams. Shelves upon shelves worth of books could be written on the mysterious stories that come into being in the heads of every person and what they mean, but to assume that the surface of such a rich area of psychology could even be scraped in one single essay is very wishful thinking indeed. ...read more.