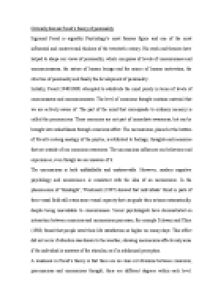 ﻿Critically discuss Freud?s theory of personality Sigmund Freud is arguably Psychology?s most famous figure and one of the most influential and controversial thinkers of the twentieth century. His work and theories have helped to shape our views of personality, which comprises of levels of consciousness and unconsciousness, the nature of human beings and the source of human motivation, the structure of personality and finally the development of personality. Initially, Freud (1940/1969) attempted to subdivide the mind purely in terms of levels of consciousness and unconsciousness. The level of conscious thought contains material that we are actively aware of. The part of the mind that corresponds to ordinary memory is called the preconscious. These memories are not part of immediate awareness, but can be brought into wakefulness through conscious effort. The unconscious, placed at the bottom of Freud?s iceberg analogy of the psyche, is attributed to feelings, thoughts and memories that are outside of our conscious awareness. The unconscious influences our behaviour and experiences, even though we are unaware of it. The unconscious is both unfalsifiable and unobservable. However, modern cognitive psychology and neuroscience is consistent with the idea of an unconscious. In the phenomenon of ?blindsight?, Weiskrantz (1997) showed that individuals? blind in parts of their visual field still retain some visual capacity that can guide their actions automatically, despite being unavailable to consciousness. Social psychologists have demonstrated an interaction between conscious and unconscious processes, for example Schwarz and Clore (1983) ...read more.

Relationship changes with parents? leads to the Oedipus complex. This begins with the boy having sexual desires for his mother, but because he recognises his father as a powerful rival, he fears that he might castrate him if he discovered the boy?s desire. To resolve the problem, the boy identifies with his father and takes on the male role in society. Freud proposed the Electra complex for girls, which describes the competition she has with her mother for the affections of her father. At the latency stage, the child?s energies are taken up in socialisation and learning. As children become more involved in social interactions, they develop defence mechanisms to help them cope with basic anxiety caused by conflicts between the id, ego and superego. Finally, the genital stage involves sexual desires being brought into consciousness with the onset of puberty. The Oedipus and Electra complexes are very controversial as many people find the notion of childhood sexuality difficult to accept. The theory would predict that gender identity arises at approximately four or five years of age, following either the Oedipus or the Electra complex. Valid evidence suggests that children identify long before this and that gender identity develops gradually (Slaby and Frey, 1975). Freud was unhappy with the Electra complex, claiming that women were ?a great mystery?, which also weakens his theory. The Oedipus complex was proposed from his self-analysis, (Masson, 1985) which is not the product of objective scientific research. ...read more.

Perhaps this isn?t due to repression, but due to striving to overcome what has happened earlier in life? Modern cognitive therapies have identified ?cognitive avoidance? which appears to be similar to Freud?s concept of defence mechanisms (Brewin and Andrews, 2000). Although useful within society, an overuse of them can lead to various psychological disorders. Excessive use of repression results in individuals being dishonest with their feelings, resulting in a lack of close relationships (Freud, 1901/1965). Like many of Freud?s theories, defence mechanisms are not visible to the eye so once again they remain untestable. To conclude, there is an optimum level in which defence mechanisms can be used to maintain a healthy psychological state as they can easily be misused. Although there is support for some of the main concepts, large areas of Freud?s work still remain untested. Freud presents a pessimistic, one-sided view of human nature (Freud, 1901/1965). His rich detail of the Oedipus complex over the Electra complex shows his approach is male-orientated and regards the female as inferior because she is seen to have a weak ego compared to the male. However, Freud?s theories recognise the complexity of behaviour and thought as well as demonstrating the value of individual and detailed case studies. His theories have had many practical applications, as even in the modern world of today psychoanalytic therapy treats many types of mental disorders, as well as leading to the development of psychosocial therapies. To summarise, although Freud is criticised for being unscientific, his ideas have largely contributed to the development of psychology. ...read more.