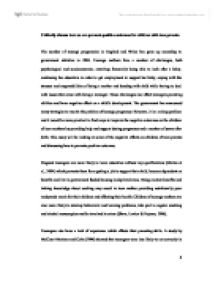 Critically discuss how we can promote positive outcomes for children with teen parents.

The number of teenage pregnancies in England and Wales has gone up according to government statistics in 2004. Teenage mothers face a number of challenges, both psychological and socioeconomic, involving financially being able to look after a baby, continuing her education in order to get employment to support her baby, coping with the stresses and responsibilities of being a mother and bonding with child while having to deal with issues that come with being a teenager. These challenges can affect teenagers parenting abilities and have negative effect on a child’s development. The government has announced many strategies to resolve the problem of teenage pregnancy. However, it is a raising problem and it would be more practical to find ways to improve the negative outcomes on the children of teen mothers by providing help and support during pregnancy and a number of years after birth. This essay will be looking at some of the negative effects on children of teen parents and discussing how to promote positive outcomes.

Pregnant teenagers are more likely to leave education without any qualifications (Molina et al., 2004) which prevents them from getting a job to support their child, become dependent on benefits and live in government funded housing in deprived areas. Being on state benefits and lacking knowledge about cooking may result in teen mother providing nutritionally poor readymade meals for their children and affecting their health. Children of teenage mothers are also more likely to develop behavioral and learning problems, take part in regular smoking and alcohol consumption and be involved in crime (Shaw, Lawlor & Najman, 2006).

Teenagers also have a lack of experience which affects their parenting skills. A study by McClure-Martinez and Cohn (1996) showed that teenagers were less likely to act correctly in dangerous situations compared to adult mothers. This is further supported by previous studies which showed that the children of teenagers are more likely to be ‘at risk’ in dangerous situations (Davie, Hutt, Vincent & Mason, 1984; McCormick, Shapiro & Starfield, 1981). This however might be biased to adult mothers who have experienced children, whereas the teenagers were tested during pregnancy and therefore had none.

Financial instabilities can cause stress and depression which affects teenager’s abilities to cope. Teenage mothers are more likely to suffer from symptoms of depression (Troutman & Cutrona, 1990) and this can cause problems with mother-child interaction and bonding. Trad (1995) argued that teenagers are unable to bond with their child emotionally due to the fact that they themselves are still developing. This can result in an avoidant-insecure attachment which will affect the child’s other relationships in later life.  Park and Waters (1989) reported that insecurely attached children were controlling, unfriendly, less responsive and seemed unhappy while playing at the age of 4. Stress from financial issues can contribute in effecting child abuse which can also lead to more serious consequences such as child mortality. A review by Buchholz and Korn-Bursztyn (1993) showed that teenage parents stressed by financial, emotional and social problems were more likely to abuse and neglect their children.

However, the problems mentioned so far can be prevented and positive outcomes promoted with the support from social networks. The mother of the teen is the most important person involved in this process. Unger and Cooley (1992) found that grandmother’s help with childcare enabled teenagers to go back to education and eventually get employment. Living with grandmother also promoted better health outcomes in children at 12 months old (Schuster, 1986; as cited in Roye & Balk, 1996). However, arguments between mothers and daughters can create an unstable environment for children (Unger & Cooley, 1992). Alternatively, putting the child into day care still enables teenager to continue education and has many positive outcomes for the child. It has been found that children attending high-quality day care had higher cognitive and academic levels which later helped with math and reading abilities (Champbell, Pungello, Miller-Johnson, Burchinal and Ramey, 2001).

The second most important person to facilitating positive outcomes is a partner. A partner provides support and creates a better home environment for a child to grow up in (Unger and Cooley, 1992) and has positive impact on teen mother’s finances if living together (Hardy, Duggan & Pearson, 1989); which provided a better life for the child. Unfortunately, most fathers don’t live with their children due to financial difficulties and fathers contact with the child decreases over time (Rivera, Sweeney and Henderson, 1986). The continued absence of a father figure can cause problems in children. Children who felt close to their fathers did well in their studies, were likely to get a job and were unlikely to suffer from depression (Furstenberg, Brooks-Gunn & Morgan, 1987; as cited in Roye & Balk; 1996).

A supportive partner can also benefit teen mother’s psychological well-being and mother-child bonding. Mothers were more responsive and warm towards their children if they felt supported by a partner (Unger and Wandersman, 1988). This can prevent insecure attachment between mother and child mentioned earlier. Thompson and Peebles-Wilkins (1992) found that teen mother depression decreased when they were supported by partner. However, if partners are involved in crime, alcohol and drug abuse, it may be a cause of stress (Wilkerson, 1991; as cited in Roye & Balk; 1996). Having a partner can also have negative effects on mother’s education as they are more likely to leave education if living with a partner and this will later affect the lifestyle of the child. However, teen mothers were more likely to continue with education if partners were involved, e.g. TAPP programs (Warrick, Christianson, Walruff and Cook, 1993).

Help from social support networks are beneficial alongside professional help. Burke and Liston (1994) established that professional support such as medical care from pediatricians and nurses were invaluable to teenage mothers. By helping mothers, professional support workers are actually helping the children by attempting to prevent the negative outcomes mentioned earlier. Programs involving professionals has had many benefits. Fulton, Murphy and Anderson (1991) found that teenage parenting programs increased teenager’s knowledge about parenting and child development and it was also found that none of the teenagers that took part were abusing or neglecting their child after the program.

Some intervention programs have promoted better mother-child attachment by helping mothers to be more responsive which is important for attachment, as mothers who are more responsive tend to have securely attached children. Such programs involved ‘Interaction Coaching for Adolescent Parents and their Infants’ (Censullo, 1994) and ‘Key to Caregiving program’ (Letourneau, 2001); both improved teenagers responsiveness and interactions with their child. Other programs helped mothers stay in education and get employment to support their child, such as ‘Grads Program’ (Ferguson, 1987; Quint, 1991; as cited in Letourneau, Stewart & Barnfather, 2004).

Conversely, despite most teenagers’ inability to cope with the issues previously mentioned, research has found that some teenagers act differently by showing resilience and determination during the challenges of being a teenage mother. A study by Weed, Keogh and Borkowski (2000) found that teenagers who show more resilience tend to have more support from significant others and gained better education before pregnancy. As these factors help teenagers to cope and provide a better quality of life for their children, lessons learnt from these women should be implemented into intervention programs. This could be used to empower vulnerable teenagers, so that positive outcomes can be promoted in their children.

In conclusion, pregnant teenagers leave education without any qualifications, preventing them from getting jobs to support their children financially, leading to poor diet and living conditions, affecting the child’s health and other aspects in later life. The lack of experience affects teens parenting skills and children are more at risk in dangerous situations compared to children of older mothers. Stress and depression is caused by financial problems which effects teen’s ability to cope with her child. This can result into an insecure attachment and effect later relationships in a child’s life. Social support networks are important for promoting positive outcomes in children of teen parents. The grandmother is the most important, as her help with childcare enables teen mothers to continue studying. However, if being reliant on grandmother isn’t practical, day care can be used to look after children instead. The second most important person is the partner of the teen mother who provides a better financial situation, positive effects on mother-child bonding and mothers psychological well-being, but on the other hand, has been associated with negative effect on teen mother’s education. Professional support has also promoted positive outcomes through a number of intervention programs, supporting better mother-child attachment, helping mothers continue education and get future employment. However, teen mothers under 16 years old and mother’s suffering from depression didn’t benefit much. Research has found that some teens show resilience and determination during the challenges of being a mother and the factors that empower them should be used to encourage other teen mothers and promote positive outcome in their children.