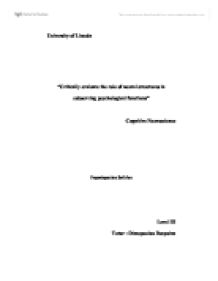 University of Lincoln "Critically evaluate the role of neural structures in subserving psychological functions" Cognitive Neuroscience Papadopoulos Sotirios Level III Tutor : Dimopoulou Despoina INTRODUCTION The formation of the top of the brain includes the left and right cerebral hemispheres that are covered by a thin cortex, the cerebral cortex. This cortex is the surface of the brain and it is comprised by four lobes in each hemisphere, frontal, temporal, parietal, and occipital lobe. Research on the brain has concluded that each area of the cortex controls a number of functions. The parts of the cortex that receive information from the body or the environment are located in the back of the brain. The middle area of the brain relates to the movement of our body and the areas known as association areas control language, thinking and memory (Carroll, 1999, Yule, 1996). The part of the spinal cord that continues into the brain is the medulla and it is responsible for vital functions such as breathing. Above the medulla is located the cerebellum. Cerebellum cooperates with the spinal cord in order to achieve precision (Bradshaw, Mattingley, 1995). Furthermore cerebellum and medulla receive information by the thalamus, which is located at the top of the brain stem. Thalamus also receives information from the body and redirects it to the other parts of the brain. Under the thalamus is located the hypothalamus, that is related with normalization of the body's internal functions, like hunger, thirst sex and temperature. ...read more.

Patients with pure alexia without agraphia lose the ability to read. However they are able to write, but cannot read what they have written. This disorder derives from destroyed left visual cortex Aphasics also show reading disabilities in addition to their linguistic disorders. In some cases the reading disabilities are the only symptom. Dyslexia generally refers to reading impairment and has separate forms (Thompson,2000; Holmes1978; Lipson & Wixson, 1997): One type of dyslexia is developmental dyslexia. It describes people with normal to high intelligence that have reading problems without any identified brain damage. Acquired dyslexia describes people who have reading disabilities due to some known brain damage, although it is not always known where the damge is (Rayner & Pollatsek, 1989; Thomson, 2000; Van Orden, Jansen Op De Haar & Bosman, 1997; Zesiger & DePartz,1997) Furthermore acquired dyslexias are distinguished to : * Surface dyslexia. Surface dyslectics show an impairment in reading only irregular words. The research showed that this behaviour occurs because surface dyslectics are trying to apply grapheme phoneme rules. * phonological dyslexia. Although phonological dyslectics can read known words, they show disability in reading pronounceable non-words and unfamiliar words. * deep dyslexia. Deep dyslectics tend to substitute a word with another semantically related word and they are unable to read pronounceable non-words and abstract words (Rayner, Pollatsek, 1989, Bradshaw, Mattingley, 1995). MEMORY Memory can be defined as the way in which experience we had in the past can be stored to the brain and how it can be expressed in our future behavior. ...read more.

Chronic alcoholics with a bad case of malnutrition, leading to the lack of vitamin B1, suffer from that particular syndrome. These patients, though may seem normal when somebody first meets with them (they can remember very well events that came before their alcoholism), can often ask the same question even right after they have heard the answer or they can tell the same story over and over again. Along with these symptoms, come usually some episodes of disorientation and confusion (Milner, 1999). It has been shown that the brains of these patients have been extensively harmed in the area of the diencephalons (a collection of infracortical structures) (Eyesenck, 1995). As studies have shown (Parkin, 1999), the neural system which lays within the medial temporal-diencephalic region is responsible for establishing new memories. CONCLUSION The main purpose of this study was to analyze the neural structures and how they relate and support psychological functions. The cerebral hemispheres, the cerebellum and the brain stem are the three main parts of a brain. Each one relates with specific operations and all interact in order to control our vital needs and behavioural responses. The psychological functions that were investigated here were language and memory. Language has a specific construction, that individuals with brain damage such as aphasias may not interpret, or they may be capable of understanding some aspects of it. Memory is the psychological fermentation that stores past events, and how this events are recalled in the future as an aspect of our behaviour. Various theories have categorized memory, and numerous researches were conducted in order to find which parts of the brain are related to this function. ...read more.