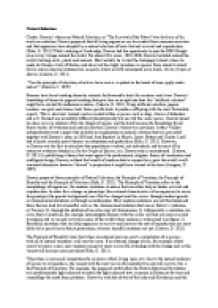 ﻿Natural Selection Charles Darwin?s theory on Natural Selection, or ?The Survival of the Fittest? was the basis of his work on evolution. Darwin proposed that all living organisms are descended from common ancestors and that organisms have adapted by a natural selection of traits that aid survival and reproduction (Hide, G. 2011).Whilst studying at Cambridge, Darwin had the opportunity to join the HMS Beagle on a survey voyage around the world. For almost five years, 1831-1836, Darwin travelled around the world studying rocks, plants and animals. Most notably he visited the Galapagos Islands where he made his famous study of finches and observed the slight variations in species from island to island. On his return, Darwin continued his research, which in 1858 culminated in his book, On the Origin of Species (Sadava, D. 2011). ?Can the principle of selection, which we have seen is so potent in the hands of man, apply under nature?? (Darwin, C. 1859) Humans have been breeding domestic animals for favourable traits for centuries and it was Darwin?s knowledge of domestic pigeon breeding that gave him an insight into how this ?artificial selection? might have existed for millennia in nature. (Sadava, D. 2011) Using artificial selection, pigeon breeders can pick and choose traits from specific birds to produce offspring with the most favourable aspects. This is also how variants can be created within a species such as dogs, where a Chihuahua and a St. ...read more.

(Jones, S. 1999) Using variants of colour in mice as an example, different modes of selection can be shown using graphs (See figure 1.). Stabilising selection removes the extremes from a population. Graph 1 shows that very light coloured mice or very dark coloured mice are more susceptible to predators and so the most successful mice are those that are in between the two extremes. In graph 2, directional selection shows that when an external pressure increases the vulnerability of light coloured mice, the population shifts so that mice become darker over time. Graph 3 shows that when the extremes of a population, for example very dark or very light coloured mice, are the favourable variant a species can diverge into two separate groups and can eventually lead to two separate species forming. Another mode of selection, balancing selection, is more clearly explained by the sickle cell trait (figure 2). Again, this disease is a random genetic mutation and the balance that it confers to heterozygote humans means that these people are more likely to survive and reproduce as they have the resistance to malaria but not the debilitating effects of sickle cell disease. Sexual selection is also be a factor as organisms are more likely to choose a mate that displays attributes that are conducive to survival and increased reproduction. However, some sexually attractive traits will be ignored if a new external pressure has made this trait detrimental to survival. ...read more.

All living organisms are similar at a cellular level, in the way that basic anatomical structures develop and in chemical composition. DNA is the genetic code that determines the structure of organisms and similarities between the DNA of species have been shown by cracking this code. It is to be expected that species that share physical characteristics would share a similarity in DNA, humans and chimpanzees for example, but humans also share 40% of DNA with bananas (Cracraft, J. 2004) suggesting that all living organisms, at some point, shared common ancestors. Junk, or non-coding, DNA is also strong evidence for evolution as these vestigial sequences would not occur if an organism had just simply appeared (Elder, R. 2012). Darwin?s theories on natural selection, evolution and common ancestry were published at a time when religious creationism was the norm and many people, even scientists, refused to accept the idea that humans were created through sheer chance and descended from animals. Darwin himself was apologetic to the extreme and was wary of challenging the religious status quo (Amigoni, D. 1995) but luckily, for modern science, his ideas gained a following and formed the basis for modern evolutionary theory. The vast amount of evidence that is now available through studies and recent advances in technology mean that the theory of evolution is now accepted, although in some parts of the world creationism seems to be having somewhat of a renaissance, and it will hopefully continue to pave the way for new and exciting discoveries of our past. ...read more.