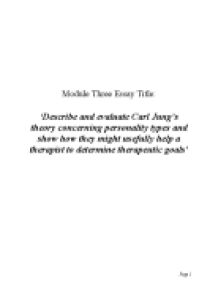 ﻿Module Three Essay Title: ?Describe and evaluate Carl Jung?s theory concerning personality types and show how they might usefully help a therapist to determine therapeutic goals? Page 1 Introduction In this essay I aim to demonstrate an understanding of Jung?s personality types by describing and evaluating his theory and to show how they might useful in helping a therapist to determine therapeutic goals. I will also look at some of the criticisms levelled at Jung?s theory. Carl Gustav Jung, (26 July 1875 ? 6 June 1961), was a Swiss psychologist and psychiatrist, and the founder of analytical psychology. His father was a Pastor, and he had an isolated childhood, becoming very introverted, it seems he had a schizoid personality. Although Freud was involved with analytical psychology and worked with patients with hysterical neuroses; Jung, however, worked with psychotic patients in hospital. He was struck by the universal symbols (or Archetypes) in their delusions and hallucinations (ref. Dennis Brown and Jonathan Redder (1989) p.107). His work and influence extends way beyond understanding personality, and he is considered to be one of the greatest thinkers to have theorised about life and how people relate to it. Carl Jung was among many great personality theorists who drew inspiration and guidance from the ancient models like astrology and the Four Temperaments. For hundreds of years there has been some kind of 'typology' to try and categorise individual?s attitudes and behaviour, e.g. Astrology. Oriental astrologers invented the oldest form of typology; believing is that there is a personality trait that is relevant to each sign and that a person?s character/personality can be classified in terms of the elements ? fire water air and earth. Those under fire had a fiery nature and corresponding temperament and fate, etc. The ancient Greeks believed in the 'four temperaments' / 'four humours', which can be traced back to Ancient Greek medicine and philosophy (400BC), especially in the work of Hippocrates - the 'Father of Medicine') ...read more.

The personal unconscious is a reservoir of experience unique to each individual consisting of perceptions, thoughts, feelings and memories that have been put to one side or repressed but not always covered by sea and therefore can be reclaimed. Whereas the personal unconscious is unique to every individual, the collective unconscious is shared or ?transpersonal? and consists of certain potentialities that we all share because of our human nature, because we all live in groups and in some form of society or family life. He believed that the collective unconscious did not develop individually but was inherited and consisted of pre-existent forms, the archetypes. An archetype is a universal thought form or predisposition to respond to the world in certain ways and is crucial to Jung?s concept of the collective unconscious because it emphasises potentialities in which we may express our humanness. He believed that they appeared to us in dreams, art, ritual, myths and symptoms. Eysenck believed that from a point of view of science, Jung?s contribution to the study of personality types had been primarily negative as he permitted mystical notions to override empirical data and sought to go beyond descriptive analysis to the causal analysis of personality. A person is not usually defined by only one of the eight personality types. Instead, the different functions exist in a hierarchy. One function will have a superior effect and another will have a secondary effect. Usually, according to Jung, a person only makes significant use Page 5 of two functions. The other two take inferior positions. Jung believed that it was not sufficient to possess just one of the above-mentioned functions to be a well-rounded personality and be able to face life?s experiences. Jung described two of the four functions as rational and two as irrational; also he used the terms judging/perceiving. Thinking can account for logic and judging. Our likes/dislikes are a feeling function. ...read more.

Jung said that people connect ideas, feelings, experiences and information by way of associations in the unconscious in such a way as to affect their behavior. He identified these groupings as ?Complexes?. He believed that they may be organised around a particular person or object and the therapist may use this knowledge to bring to the forefront of the client?s consciousness a situation which they may be finding difficult to extricate from. The therapeutic goal of Jungian therapy is to help the client resolve unbalanced aspects of their personality which present in a number of differing ways of psychological disturbance. Examples include: extreme negativity, addictions, degrees of paranoia, sudden religious conversion, in appropriate attachments to unsuitable partners, hysteria, mania, depression, hypochondrias or schizoid personality traits as Jung himself had as a boy. By understanding his theory and how each type may present the therapist can help them unlock the shadow sides of their personality. It is a process in which the client is helped to come to terms with the place of self within their own world and also to help them see that they are part of a greater collective unconscious. Much of Jung?s work was about the interconnectedness of all people and cultures. Today more than ever as we seek to become ?one world? Jung?s work with eastern as well as western religions and cultures seems more and more appropriate. The work of Hans Eysenck through empirical studies across the world has shown that personality types exist in all cultures and therefore concludes that there is a genetic component to personality types. ?Such cross cultural unanimity would be unlikely if biological factors did not play a predominant part? (Eysenck,1990) But like Jung he believed that environmental factors probably determine how much an individual will develop to their full potential. The use of appropriate assessment techniques can be invaluable in helping a therapist to develop the untapped potential within the individual and is so doing contribute to the collective unconsciousness and synchronicity of the planet as a whole. ...read more.