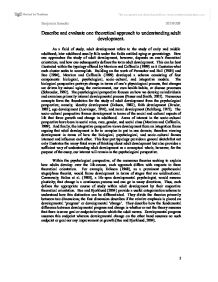 Describe and evaluate one theoretical approach to understanding adult development

This is accomplished by establishing one or more genuinely intimate relationships; 'love' is the strength to be attained. In the second stage of adulthood - generativity versus stagnation - the individual must find a way to support the next generation by redirecting attention from self to others. Successful mastery of this stage results in 'care'. Resolution of the final stage of adulthood - integrity versus despair - culminates in 'wisdom'. Erikson (1968) defines integrity as "the acceptance of one's one and only life cycle and the people who have become significant to it as something that had to be and that, by necessity, permitted no substitutions" (Erikson, 1968; p. 139; as cited in Hoare, 2005); meaning, if all previous life stages have been addressed in a satisfactory way, those approaching the end of life are able to accept themselves as they are. Unlike Erikson, Levinson (1986) identifies a relatively orderly sequence of periods during the adult years that are age-linked. He acknowledges a relationship between his periods and Erikson's developmental stages, but emphasises change rather than development. For Levinson (1986), development consists of periods of relative stability (structure building) ...read more.

Although Levinson's initial research was limited to middle-class American men, Levinson maintains that his theory also applies to women, different social classes, diverse cultures, and other periods of history (Levinson and Levinson, 1996). Other weaknesses of stage theories are the overemphasis on chronological age, which may mask variations in individual lives, for example, Neugarten (1968), in challenging the age-graded concept of adult development, noted that U.S. society is increasingly age irrelevant. She notes how participation in further education is no longer "from the ages of 18 years to 22 years" rather rooms are now populated with a much wider age range of people (Neugarten, 1968). The need to understand adult development is essential for the development of scientific knowledge that focuses on the welfare of humankind in general. The contribution of expert psychologists in the field of adult development has been considered in the present essay. The approach of the essay was that of theoretical approach and the contributions on stage model were given priority for the discussion. We hereby conclude that understanding of development in adults has gained great insight by the contribution of stage model and is therefore exercising a prominent role of application with appreciation in the field of psychology. Word Count: 2072. ...read more.