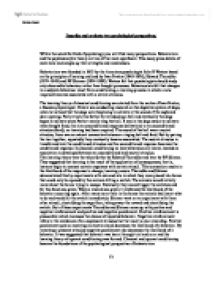 Emma Grant Describe and evaluate two psychological perspectives. Within the scientific field of psychology you will find many perspectives. Behaviorism and the psychoanalytic theory are two of the most significant. This essay gives details of each view and weighs up their strengths and weaknesses. Behaviorism was founded in 1913 by the American psychologist John B Watson based on the principles of learning outlined by Ivan Pavlov (1849-1936), Edward Thorndike (1874-1949) and BF Skinner (1904-1990). Watson felt that psychologists should study only observable behaviour rather than thought processes. Behaviourists felt that changes in a subjects behaviour result from conditioning, a learning process in which a new response becomes associated with a certain stimulus. The learning theory of classical conditioning was started from the works of Ivan Pavlov, a Russian physiologist. Pavlov was conducting research on the digestive system of dogs, when he noticed that the dogs were beginning to salivate at the sound of the cupboard door opening. Pavlov took this further by introducing a bell and eventually the dogs began to salivate when Pavlov merely rang the bell. It was in the dogs nature to salivate when bought food, this is an unconditioned response (salivation) ...read more.

Classical conditioning has had a positive influence on many forms of therapy, especially for people with phobias. This is where the patients are taught to associate something pleasurable with their fear, therefore eventually losing the phobia. However, there are also criticisms to Behaviorism. The learning theories were all developed on animals. Where this can explain the behavior of these animals it cannot automatically be associated with the more complex behaviors of humans. Some people also disagree with the overuse/cruelty to these animals; many of them became confused and neurotic over time. Behaviorists ignore genetics; although they can teach the animals new behaviours they cannot stamp out what is their natural genetic instincts. They also ignore mental processes, only looking at the stimulus and response and not at the thought process used to connect the two. There are also concerns about the use of conditioning in schools and prisons as some see this form of control as unethical while others regard it as a good thing. Despite these criticisms it is in no doubt that Behaviorism is an important approach in explaining behavior. ...read more.

He showed that people with psychological problems could be treated rather then incarcerated. However, many object to his theories. They see his work as unscientific as his observations were biased, mainly being on middle class, white, Viennese women whose case notes were not usually written up until well after the session had ended. It is felt that it is difficult to assess whether psychoanalysis actually works as it can take up to five years to treat someone. There is also a lack of real evidence showing that the personality is structured and operates along the lines Freud suggested, mainly because this theory was constructed on unobservable notions. Freud may have also over emphasised sex in his theories as they were developed at a time of great sexual repression. However, Freud's psychoanalytic theory remains a significant contribution to our understanding of psychology and Freud can be thought of as the father of psychoanalysis. By looking at behaviorism and the psychoanalytic theory we can see that they have both made major contributions to the world of psychology. They have positive and negative points but it is in no doubt that without some of these theories we would not be able to explain a large amount of human behavior. (3) ...read more.