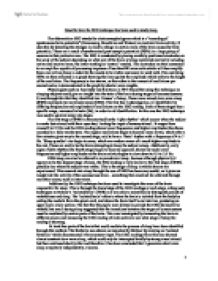 Describe how the EEG technique has been used to study sleep.

Describe how the EEG technique has been used to study sleep.

The abbreviation EEG stands for electroencephalogram which is a “recording of spontaneous brain potentials” (Rozenweig, Breedlove and Watson) or electrical brain activity. It does this by detecting the changes in electric charge in certain areas of the brain caused by field potentials. These are a result of synchronised post-synaptic potentials (PSPs) in a large group of neurons in that particular area. The EEG is conducted by placing carefully positioned electrodes on the scalp of the subject depending on what part of the brain is being monitored (normally including active and inactive areas, the latter working as ‘control’ results). The electrodes are then connected to an amplifier capable of processing impulses of less than100 microvolts which will then amplify them one million times in order for the results to be visible and easier to work with. The oscillating PSPs are then reflected in a graph showing the time against the amplitude which refers to the height of the oscillation. The frequency is also shown, as this refers to the amount of oscillations per second and so is demonstrated in the graph by shorter wave-lengths.

Physiologists such as Aserinsky and Kleitman in 1953 found that using this technique on sleeping subjects could give an insight into the state of the brain during stages of unconsciousness.  It was through this that they identified two ‘classes’ of sleep. These were named slow-wave sleep (SWS) and rapid eye movement sleep (REM). The first has 4 subcategories, all identifiable by differing frequencies and amplitudes of oscillations on the EEG reading. Each of these stages has a specific range, measured in hertz (Hz), in order to aid identification. In this case the EEG technique was used to separate sleep into stages.

The first stage of SWS is characterised by the ‘alpha rhythm’ which occurs when the subject is awake but relaxed with their eyes shut, limiting the input of sensory stimuli. It ranges from around 9 to 12 Hz and the EEG reading shows lower frequencies and higher amplitudes than those recorded in a fully awake state. The regular oscillations begin to become more erratic, which after a few minutes gives way to the second stage, said to have a ‘theta’ rhythm with a frequency of 4 to 7 Hz. ‘Sleep spindles’ also begin to occur, which are random waves of a much higher amplitude to the rest. These are said to be the brain attempting to keep the subject asleep. Additionally, early signs of delta rhythm (the fourth stage) begin to become apparent, shown by much lower frequencies and higher amplitudes as the brain activity begins to slow down to 0.5 to 3.5 Hz.

REM sleep can also be referred to as paradoxical sleep, because although physically it appears to be the deepest stage of sleep, the EEG reading is very similar to the first stage of SWS, possibly also when the subject was awake. This is the stage of sleep in which dreams are experienced. This research into sleep through the use of EEG has been very useful, as it gives an insight into the activity of the unconscious brain – something that could not be achieved through any other means, such as interviews.

Additionally, the EEG technique has been used to investigate the areas of the brain responsible for sleep. This is through the knowledge of the EEG readings at each stage, aiding such techniques as Brémer’s ‘isolated brain’ (1938) as it was able to scientifically distinguish periods of wakefulness and sleep. The ‘isolated brain’ refers to when the brain is isolated from the body by cutting the medulla from the spinal cord, and where the brain itself is cut into two, producing an upper and a lower section. The fact that the pupils were dilated in periods the EEG showed to be wakeful but small during sleep suggested that the transitions between the stages of consciousness must be mediated by certain parts of the brain. This was investigated by transecting the brain in different places and measuring the EEG reading of each section to see what stage of sleep the reading is showing.

At least four parts of the brain that could mediate the process of sleep have been identified through this method. The forebrain was shown as important by Brémer by creating an ‘isolated forebrain’ which disconnected it from sensory input. The EEG readings from this area showed almost constant slow-wave sleep, which could only be interrupted briefly by strong visual stimuli but then continued shortly after and therefore it has been concluded that it generates short wave sleep completely independently, it seems.

There is also a brainstem system (the reticular formation) that wakes up the forebrain. This was discovered by Moruzzi and Magoun (1949) who found that electrically stimulating this part of the brain would rapidly alter the EEG reading from one indicative of sleep state to one of an awake state. The importance of this area was confirmed by the results of lacerations in this region which produced constant sleep.

A pontine neural system activates the REM stage which was suggested by Freidman and Jones (1984) who found that legions to a specific part of the pons (an area ventral to the locus coeruleous) prevent EEG readings indicative of REM from occurring at all. Additionally Siegel (1994) discovered that electrically stimulating the same area initiates or lengthens it.

Also there is a hypothalamic system that interacts with the other three sections to decide whether the brain is awake or not. This was discovered through investigation into narcolepsy, which is a condition where the sufferer will suddenly fall asleep at random intervals during the day for anywhere between five and thirty minutes. During sleeping hours, the show normal sleeping patterns but their sleep attacks during the day are characterised by their EEG readings showing the REM stage occurring after only a few minutes.

Additionally, by collecting EEG readings of humans at various ages it has been discovered that sleep patterns change with age. EEG readings of infants show that they have a larger percentage of REM sleep, especially in their first 2 weeks where 50% of their sleep consists of REM (Roffwarg et al, 1966), even more if the child is premature. It also appears that they can fall straight into REM sleep, without experiencing a period of SWS beforehand as is the case with adults. This large percentage of REM gradually decreases with age along with the amount of time spent asleep in general. Stages 3 and 4 of sleep seem to decline the most, with this decline starting at around the age of 30 (Bliwise 1989) with no evidence of these stages being apparent at all after another 60 years.

The EEG technique has also played a role in investigating the effects of sleep deprivation. One way that this been done is through studies such as that conducted by Rechtschaffen and Bergmann in 1995 involving depriving rats of sleep. EEG readings were used in this case to scientifically and accurately show the experimenter when the experimental rats were falling asleep and so indicated when they should be woken up. This experiment, through the use of EEG, made significant progress into the area of sleep deprivation as the experimental rats died after a few days showing the serious adverse effects that could not have been as accurately produced without using EEG readings.

Another way EEG has been used to study sleep deprivation is by identifying REM sleep in order to allow the experimenter to control the period of time the patient is in this stage of sleep for. This was used in an experiment by Webb and Agnew (1967) to test the effects of REM deprivation, by waking the patient up after a specified amount of time once entering this stage, as indicated by their EEG reading. This discovered that REM must be a vital stage of sleep, as the longer the subject was deprived of it the quicker they initiated this stage during subsequent nights, requiring the experimenter to wake them up much more frequently to prevent them entering REM. Bruner found through this technique that participants in such studies show a REM ‘rebound’, meaning they spend much longer in REM sleep than usual for a few nights after the deprivation. These results have lead to the conclusion that REM sleep has a specific function (although this function itself is still unconfirmed) and that is must be regulated separately from the other stages of sleep.

It has also been found that if a subject is deprived of sleep for a certain amount of time, the sleep they have after that is more efficient. That is to say that the amount of time spent in shortwave sleep is increased, and since shortwave sleep deficiency has the most effect on the mental state of the participant the following day (Nykamp et al, 1998) and therefore is probably the most restorative stage of sleep, the participants sleep will be of more benefit than it would normally. This required the use of the EEG technique in order to be able to identify short-wave sleep and to be able to wake up the participants in the experimental condition at the right time.

In conclusion, although EEG readings are mainly used to detect the stages of sleep in this area of study, the scientific distinction between awake and asleep itself has proved invaluable in establishing the most important stages of sleep, the effect of deprivation and the areas responsible for each stage and so on. It has been very influential, and has encouraged the study into the stages of sleep it helped discover. Although very useful on its own, the method has produced groundbreaking results when used with techniques such as Brémer’s ‘isolated brain’ technique mentioned previously, as well as electro-oculography (EOG) which is used to measure the eye movements, and electromyograohy (EMG) which is used to measure muscle tension. The use of EOG, EMG and EEG together has allowed neuropsychologists and physiologists to obtain a full understanding of the characteristics of each stage of sleep, both in the brain and in the body.