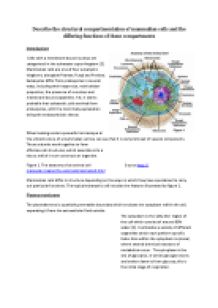 ﻿Describe the structural compartmentation of mammalian cells and the differing functions of these compartments Introduction Cells with a membrane-bound nucleus are categorised in the eukaryote super kingdom [3]. Mammalian cells are one of four eukaryotic kingdoms, alongside Plantae, Fungi and Protista. Eukaryotes differ from prokaryotes in several ways, including their larger size, multicellular properties, the presence of a nucleus and membrane-bound organelles. Yet, it seems probable that eukaryotic cells evolved from prokaryotes, with the most likely explanation being the endosymbiotic theory. When looking under a powerful microscope at the ultrastructure of a mammalian cell we can see that it is compromised of several components. These subunits work together to form effective cell structures, which assemble into a tissue, which in turn construct an organism. Figure 1. The anatomy of an animal cell Source:http://molecular.magnet.fsu.edu/cells/animalcell.html Mammalian cells differ in structure depending on the ways in which they have specialised to carry out particular functions. The typical eukaryotic cell includes the features illustrated by figure 1. Plasma membrane The plasmalemma is a partially permeable boundary which encloses the cytoplasm within the cell, separating it from the extracellular fluid outside. The cytoplasm is the ?jelly-like? region of the cell which consists of around 80% water [6]. ...read more.

After transcription in protein synthesis mRNA leaves the nucleus using these pores. Deep within the nucleus is a dark staining area called the nucleolus. The nucleolus takes a main role in the biosynthesis of rRNA and the assembly of ribosomes [3]. Abundance of nucleoli is seen in cells which produce vast amounts of protein, for example embryonic and secretory cells [2]. Although by definition a mammalian cell must contain a nucleus, not every animal cell does throughout its entire life. For example erythrocytes are anucleate when mature. The reason for this is to improve efficiency, having no nucleus provides more space for haemoglobin, meaning they can carry more oxygen to sites around the body. As can be seen in figure 3, the nuclear membrane is continuous at points with the endoplasmic recticulum to allow rapid cell signalling and communication during protein processing [3]. Endoplasmic recticulum The endoplasmic recticulum is a series of single flattened sacs enclosed by a membrane. As shown by figure 4, two distinct regions can be recognised in most cells: the rough endoplasmic recticulum and the smooth endoplasmic recticulum. The only small difference is that the rough endoplasmic recticulum has ribosomes lined on its surface whereas the smooth does not. ...read more.

A common lysosome is a peroxisome; its function is to breakdown lipids within the bilayer. Centrioles are two hollow tubes, which are arranged at right angles to one another, each centriole is made of nine bundles of microtubules. They are self-replicating organelles which help organise cell division [5]. The shape of a cell is maintained by a variety of protein filaments known as the cytoskeleton. The protein filaments come in 3 main forms: actin, intermediate and microtubules [2]. Summary Although all cells that make up a single organism contain the same genetic material in their nuclei, not all cells are identical. Cells become specialised due to their reading of the DNA fingerprint, which in turn effects to proteins made and thereby the functioning of the cell. It is vital to remember that cell components are part of a much more complex system. Life comes in an array of sizes, from single-celled bacteria to multi cellular organisms. Single-celled organisms rely on just one cell to carry out all functions, whereas a multicellular organism requires a larger extent of organisation to survive. Even though some cells are specialised to carry out a function they are limited to what they can do alone. As a result, cells must work as coherent units through cell signalling and communication for life to exist. ...read more.