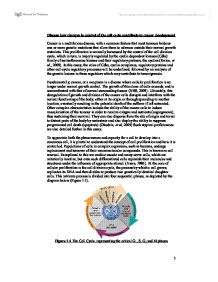 Discuss how changes in control of the cell cycle contribute to cancer development Cancer is a multifarious disease, with a common feature that most tumours harbour one or more genetic mutations that allow them to advance outside their normal growth restr

Discuss how changes in control of the cell cycle contribute to cancer development Cancer is a multifarious disease, with a common feature that most tumours harbour one or more genetic mutations that allow them to advance outside their normal growth restraints. This proliferation is normally harnessed by the control of the cell division cycle, which in turn, is majorly regulated by the cyclin dependent kinases (Cdks) family of serine/threonine kinases and their regulatory partners, the cyclins (Errico, et al., 2009). In this essay, the roles of Cdks, cyclin complexes, regulatory proteins and other cell-cycle regulatory processes will be underlined, followed by an analysis of the genetic lesions in these regulators which may contribute to tumorigenesis. Fundamentally, cancer, or a neoplasm is a disease where cellular proliferation is no longer under normal growth control. The growth of this clone of cells exceeds, and is uncoordinated with that of normal surrounding tissues (NHS, 2009). Ultimately, this deregulation of growth and division of the cancer cells disrupts and interferes with the normal functioning of the body, either at its origin or through spreading to another location, eventually resulting in the potential death of the sufferer if left untreated. Other complex characteristics include the ability of the cancer cells to induce vascularisation of the tumour in order to receive oxygen and nutrients (angiogenesis), thus sustaining their survival. They can also disperse from the site of origin and travel to distant parts of the body by metastasis and also display the ability to suppress programmed cell death (apoptosis) (Okudela, et al, 2009) Such atypical proficiencies are also detailed further in this essay. To appreciate both the phenomenon and capacity for a cell to develop into a cancerous cell, it is pivotal to understand the concept of cell proliferation and how it is controlled. Populations of cells in complex organisms, such as humans, undergo replacement and turnover of their macromolecular compounds. ...read more.

translocation in mantle cell lymphoma. Augmentation of the cyclin D1 locus 11q3, has also been identified in a number of cancer types including breast, glioma and lung. Amplification of Cdk4 has also been identified, whilst low levels of the CKI p27KIP1 protein have been shown to indicate poor prognosis in both colon and breast cancer (Welsh, et al., 2001). In considering all these genetic alterations it is clear to see that one common denominator is that they all have the ability to promote inappropriate phosphorylation and inactivation of pRb. As for the RB gene itself, mutation or deletion is a common occurrence in cancer, thus directly revoking the requirement for cyclin D-dependent kinase activity during G1. Importantly to note also is that in some tumour types there appears to be a mutually exclusive behaviour in the genetic alterations on the p16INK4A/ cyclin D/ pRb pathway. An example of this is in lung cancer where tumours tend to harbour either deletions or mutations in RB or CDKN2 encoding p16INK4A, but not in both. This suggests in certain circumstances, genetic alteration in one member of this pathway is a sufficient contribution to tumour progression (Pavletich, 1999). Although many cellular stresses can invoke cell cycle checkpoints (hypoxia, DNA damage, nucleotide deprivation, to name a few), the checkpoint pathways for G1/S, S and the G2/M transition are those which are invoked in response to DNA damage caused by double strand breaks in the DNA (DSBs). This type of DNA damage can be brought about by a number of agents of which ionizing radiation, genotoxic chemicals and reactive oxygen species are three major culprits. As DSBs affect the integrity of the genome, which if not maintained correctly can lead to cancer. Mitosis is the time in a cell when newly replicated DNA (condensed sister chromatids) is segregated so that the subsequent two daughter cells will have identical genomes. This is achieved through a highly organized series of events starting with chromosome condensation and culminating in cell division (see Appendix 1:1). ...read more.