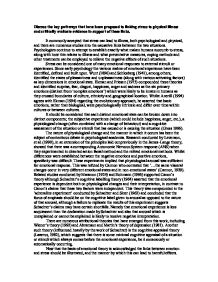 Discuss the key pathways that have been proposed to linking stress to physical illness and critically evaluate evidence in support of these links.

Discuss the key pathways that have been proposed to linking stress to physical illness and critically evaluate evidence in support of these links. It commonly accepted that stress can lead to illness, both psychological and physical, and there are numerous studies into the causative links between the two situations. Psychologists continue to attempt to establish exactly what makes humans succumb to stress, along with how this relates to illness and what preventative measures, coping methods and other treatments can be employed to relieve the negative effects of such situations. Stress can be considered one of many emotional responses to external stimuli or experiences. Since early psychology the various realms of emotional experience have been identified, defined and built upon. Wunt (1896) and Schlosberg (1941), among others, identified the states of pleasantness and unpleasantness (along with various activating factors) as key dimensions in emotional state. Ekman and Friesen (1975) compounded these theories and identified surprise, fear, disgust, happiness, anger and sadness as the six primary emotions (distinct from 'complex emotions') which were likely to be innate in humans as they crossed boundaries of culture, ethnicity and geographical location. Whilst Averill (1994) agrees with Ekman (1994) regarding the evolutionary approach, he asserted that basic emotions, rather than biological, were psychologically intrinsic and differ over time within cultures or between cultures. It should be considered that each distinct emotional state can be broken down into distinct components; the subjective experience (which could include happiness, anger, etc.), a physiological change (often combined with a change of behaviour) ...read more.

Goetsch & Fuller's classification also corresponds very closely to the stress models identified by Cox (1978). According to Lazurus (1966), stress cannot be defined objectively. What counts as a potential cause of stress or 'stressor' depends on the individual's perception of an excessive demand being made on his or her capacities. Other stressors could include frustrations and conflicts. The three main kinds of conflict are approach-avoidance, avoidance-avoidance, approach-approach (Coon, 1983). Extreme physical demands can also be causes of stress. The disruption of circadian rhythms, or the 'biological clock', which involves the internal desynchronisation of the body's functions, can be very stressful. This can occur when shift workers change their shift pattern and when people cross time zones (causing jet lag). These negative effects are increased when the biological clock is brought forward (a phase advance), as when shifts start earlier or when time zones are crossed in a West-East direction (Pinel, 1993). These changes in human lives are often most stressful when they are uncontrollable. Holmes and Rahe's Social Readjustment Rating Scale (SRRS) (1967) is a self-administered way of measuring stress, which it does in terms of life change units. The scale was intended to predict the onset of illness on the premise of the greater the amount of life change, the greater the likelihood of future illness. Studies which claim to have found support for this prediction are correlational and retrospective and the SRRS assumes that all change is inherently stressful. ...read more.

Women seem to be relatively unresponsive to stress-producing situations, which may help explain their longer average life expectancy. Women are also less likely than men to be Type A personalities, although the gap in death rates between men and women is closing, due perhaps to an alteration of lifestyle choices. An example could be the increase in drinking and smoking among females in more recent history (Davidson and Neale, 1994). The effects of stress as they relate to physical illness are compelling. Whilst basic physiological responses to a stressor may be common across humans, different factors can mediate the effects of a perceived source of stress. There are important issues raised by these correlations in terms of what coping methods are in place to accommodate such perceived threats. The term 'coping mechanism' is sometimes contrasted with 'defence mechanism', referring to conscious or constructive and unconscious or distorting solutions respectively. Secondary appraisal involves a search for coping responses that will reduce or remove the stressor (Lazerus, 1966). Five categories of coping response were highlighted; information seeking, inhibition of action, intrapsychic/palliative coping and turning to others (Cohen & Lazerus, 1979). This notion also overlaps with problem-focused and emotion-focused coping (Lazerus & Folkman, 1984). Concepts of stress management are crucial in slowing the tide of stress related illness which increases in contemporary society and can refer to a range of psychological techniques used deliberately to help reduce stress, including biofeedback, progressive muscle relaxation, meditation, hypnosis and cognitive restructuring. ...read more.