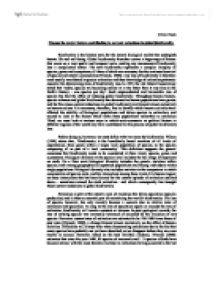 Olivia Finch Discuss the major factors contributing to current reductions in global biodiversity. Biodiversity is the blanket term for the natural biological wealth that undergirds human life and well-being. Global biodiversity therefore covers a huge range of factors that occur on a vast spatial and temporal scale, making any assessment of biodiversity loss a complicated matter. The term biodiversity represents a complex interplay of species, genes and ecosystems, all three of which are necessary for the continued survival of species and natural communities (Primack, 2000). Any loss of biodiversity is therefore most usually manifested in species extinction and thus knowledge of extinction patterns is essential for determining rates of biodiversity loss. In 1993 the US Nature Conservancy stated that 'today, species are becoming extinct at a rate faster than at any time in the Earth's history - one species per day'. Such unprecedented and irreversible loss of species has had the effect of reducing global biodiversity. Throughout human history, species richness and global biodiversity has decreased as human populations have grown, and for this reason current reductions in global biodiversity are blamed almost exclusively on human actions. It is necessary, therefore, first to identify which human activities have affected the stability of biological populations and driven species to extinction; and second to look at the factors which make these populations vulnerable to extinction. Third, we must look at various ways in which socio-economic or political factors in different regions of the world may have contributed to this process of global biodiversity loss. Before doing so, however, we must define what we mean by biodiversity. Wilson (1996) ...read more.

According to this model, the number of species on an island or habitat fragment is dependent upon the rate of immigration and the rate of extinction. It also focuses on the species-area relationship, showing that large areas will have more species than small ones. Thus the model can be used to predict the number and percentage of species that would become extinct if habitats were destroyed. Applying this model to a habitat island, it has been estimated that if 50% of the habitat were destroyed, 10% of species would be eliminated. Thus when 90% of the habitat is destroyed, 50% of species will be lost. Using such evidence, Cowlishaw (1999) predicts that 30% of forest primates in African countries will eventually go extinct due to habitat loss (cited by Primack, 2000). However predictions of extinction rates based on habitat loss are problematic and will vary considerably. This is due to a number of factors: each group of species and each geographical area forms characteristic species-area relationships; differences in estimated rates for causal factors such as deforestation will change predicted extinction rates; it is very hard to provide accurate, foolproof estimates for habitat loss, especially with such large and complex areas as tropical rainforests. There are, of course, other secondary types of human disturbances which pose additional threats to biodiversity. Over-hunting by humans throughout history has been a significant cause of the extinction of hundreds of species and the endangerment of many more, such as whales and many African large mammals. Most extinctions over past several hundred years are mainly due to over-harvesting for food, fashion, and profit. ...read more.

Structural adjustment measures mean the government has little capacity to enforce laws limiting hunting and wildlife collection; and added to this are problems of corruption and a lack of political will to protect the country's biodiversity. Clearly then, the direct causes of biodiversity loss in Cameroon such as habitat destruction through deforestation and over-hunting were further aggravated by indirect social, economic and political factors. Similar issues can be seen with the case study of China's South-Western forests. Destruction of temperate forest driven by the expansion of agriculture as well as commercial logging is eliminating habitats of the giant panda and the snub-nosed monkey, among other species. However government policies - including policies on population, poverty, land reform and logging - have only aggravated the unsustainable exploitation of resources. Political movements in the past, notably the Great Leap Forward and the Cultural Revolution, promoted unsustainable resource use and reduced the government's capacity for management. Now local governments rely heavily on logging income, leading to over-harvesting of timber, and the opening up of market following the collapse of communism has only created new incentives for logging by freeing timber prices. Thus China's historical background, as well as current political and socio-economic factors, has contributed to recent reductions of biodiversity in this region. In conclusion, it is clear that the major factors contributing to current reductions in global biodiversity are complex and highly integrative. Humanity's history of expansion in agriculture, logging, fishing, and other natural resource-based activities, as well as increases in pollution can be shown to have directly driven the process of biodiversity loss. At the same time however, these processes have been accompanied by different sets of socio-economic and political factors, often unique to different geographical regions, but which overall have served to compound the recent reductions in global biodiversity. ...read more.