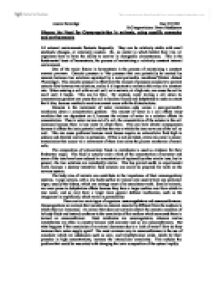 Discuss the Need for Osmoregulation in animals, using specific examples and environments

Discuss the Need for Osmoregulation in animals, using specific examples and environments All external environments fluctuate frequently. They can be relatively stable with small stochastic changes, or extremely random. So, no matter in which habitat they live, all organisms have to have the ability to survive in changeable circumstances. This is the fundamental basis of homeostasis, the process of maintaining a relatively constant internal environment. One of the major factors in homeostasis is the process of maintaining a constant osmotic pressure. Osmotic pressure is "the pressure that can potentially be created by osmosis between two solutions separated by a semi-permeable membrane"(Eckert Animal Physiology). This osmotic pressure is effectively the amount of pressure necessary to prevent osmotic flow between two solutions, and so it is important to maintain this value at a constant rate. Water entering a cell with no cell wall, as in animals, at a high rate, can cause the cell to swell until it bursts. This can be fatal. By contrast, water leaving a cell down its concentration gradient can cause the cell to become flaccid and dehydrated to such an extent that it dies, because metabolic reactions cannot occur with the diluted solutes. Osmosis is the movement of water molecules only across a semi-permeable membrane down a concentration gradient. The amount of water in a cell affects many variables that are dependent on it, because the volume of water in a solution affects its concentration. Thus is water moves out of a cell, the concentration of the solutes in the cell increases because there is less water to dilute them. ...read more.

Osmoregulation in marine elasmobranches, reptiles and teleosts does not expend much energy because most of these animals have cellular fluid compositions similar to that of the water surrounding them. They are said to be isosmotic. They can be broken into Elasmobranches e.g. sharks, which do not drink seawater, and have excrete hyperosmotic NaCl from the rectal gland. Marine teleosts such as mackerel, drink seawater and secrete salt from the gills. Freshwater teleosts such as salmon, by comparison, drink absolutely no water and absorb salt from the gills. The habitat of the animals is so important in the extent for their need to osmoregulate. In hot, arid regions, the extreme heat causes more water to evaporate from the skin and to be lost in ventilation. Cells become easily dehydrated and so in these regions, most animals have adaptations to conserve water. A salt conservation technique is also important to restore vital minerals lost in sweat. Some animals avoid the problem in the first place by not drinking much or any water, so their osmolarity is never greatly changed. For example, Desert mammals such as the desert rat, drink no water, and instead depend solely on water from the metabolism of fats. They often have special adaptations such as an extra long loops of Henle designed from the reabsorption of more water. Amphibians, which tend to live close to or in water, e.g. salamanders absorb salt through the skin. This balances the high osmolarity caused by diffusion of vast quantities of water through the integument. ...read more.

It becomes highly permeable to urea, so it leaks out by diffusion. This further adds to the osmolarity of the interstitial fluid around the bottom of the loop of Henle. In this way, it can be seen that the organs specifically designed to cope with osmolarity problems, work in a negative feedback way, without direct interception by the nervous system. When there is a lack of water, for example, more of a gradient is built up naturally because the concentration of the solutes increases if there is less volume, so this means more water is reabsorbed. This function in itself varies between species, and even between individual organisms. Although the kidney is relatively unique, osmoregulatory organs all contain similar features. For example, Malpighian tubules in insects contain similar one-cell thick tubules with brush borders and proximal and distal convoluted tubules. Osmoregulatory systems are very specific to the animal concerned because differing environments produce different needs for salts and water. The general need for a constant osmolarity in cells is a basic fundamental for all living organisms though, animals or plants. Word Count = 2517 Alberts, B., Johnson, A., Lewis, J., Raff, M., Roberts, K. and Walter, P. (2002). Molecular Biology of the Cell. 4th ed. New York: Garland Science. Jones, M., Fosbery, R. and Taylor, D. (2000). Biology 1. Cambridge, Cambridge University Press. Jones, M. and Gregory, J. (2001). Biology 2. Cambridge: Cambridge University Press. Randall, D., Burggren, W. and French, K. (2002). Eckert Animal Physiology: Mechanism and Adaptations. 5th ed. New York: W.H.Freeman and Company Widmaier, E.P. (1999). Why Geese Don't Get Obese (And We Do). New York: W.H.Freeman and Company http://www.neoucom.edu/Depts/ANAT/Osmo.html Jessica Beveridge Due 25/11/02 PoO supervisions: Dawn Muddyman ...read more.