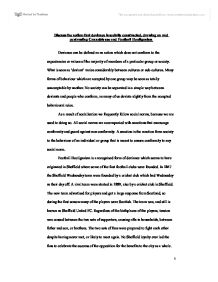 Discuss the notion that deviance is socially constructed, drawing on and contrasting Cannabis use and Football Hooliganism

Discuss the notion that deviance is socially constructed, drawing on and contrasting Cannabis use and Football Hooliganism Deviance can be defined as an action which does not conform to the expectancies or values of the majority of members of a particular group or society. What is seen as 'deviant' varies considerably between cultures or sub-cultures. Many forms of behaviour which are accepted by one group may be seen as totally unacceptable by another. No society can be separated in a simple way between deviants and people who conform, as many of us deviate slightly from the accepted behavioural rules. As a result of socialisation we frequently follow social norms, because we are used to doing so. All social norms are accompanied with sanctions that encourage conformity and guard against non-conformity. A sanction is the reaction from society to the behaviour of an individual or group that is meant to ensure conformity to any social norm. Football Hooliganism is a recognised form of deviance which seems to have originated in Sheffield where some of the first football clubs were founded. In 1867 the Sheffield Wednesday team were founded by a cricket club which had Wednesday as their day off. ...read more.

He believed that "Deviant behaviour is behaviour that people so label". Becker found that at the beginning of the 60's the use of cannabis was a minimal activity compared to what it is today as it was less socially acceptable then. The drug class of cannabis has been reduced from class A to B and is currently under consideration to be moved down to class C. As the laws on cannabis use are relaxed society's views tend to change. A report from the House of Lords, 2001, suggests cannabis should be legalised for medicinal use. The report, by the Lords select committee on science and technology, states that patients who use cannabis as a method of easing symptoms of debilitating conditions like multiple sclerosis should not have to live in fear of prosecution. "We consider it undesirable to prosecute genuine therapeutic users of cannabis who possess or grow cannabis for their own use." Becker found that becoming a user was achieved through various stages which helped the user to be accepted into the subculture by learning and using techniques, associating with more advanced users, and adapting their moral attitudes towards use and non-use of the drug. ...read more.

This relates to the unintended result that can arise when by labelling someone as deviant an agency of control, such as prisons or social agencies, actually insight the deviant to display more of the same behaviour. In other words, because of society's method of control of deviant acts the undesired behaviour becomes more common and those labelled deviant, such as cannabis users and football hooligans, become even more resistant to change. In conclusion we have seen that a deviant act such as cannabis use has increased over the years because of social influences such as society's changing attitude towards the drug, society is becoming increasingly aware of the beneficial use of the drug. This implies that society does have some bearing over what is classed as a deviant act. However, a deviant act such as Football Hooliganism is not only constructed by society's view but also involves the influence of a crowd and the fact that anonymity occurs within a crowd. This highlights the idea that violence and other deviant behaviour associated with football hooliganism can occur because no single person can be held responsible for the actions of a group. This gives us an insight into the view that deviance is constructed socially, because of the theory of labelling and the conformity to the characteristics of a deviant label. ...read more.