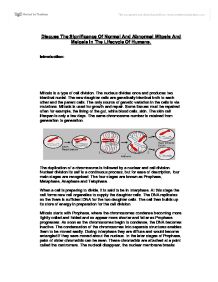 Discuss The Significance Of Normal And Abnormal Mitosis And Meiosis In The Lifecycle Of Humans. Introduction: Mitosis is a type of cell division. The nucleus divides once and produces two identical nuclei. The new daughter cells are genetically identical both to each other and the parent cells. The only source of genetic variation in the cells is via mutations. Mitosis is used for growth and repair. Some tissues must be repaired often for example, the lining of the gut, white blood cells, skin. The skin cell lifespan is only a few days. The same chromosome number is retained from generation to generation. The duplication of a chromosome is followed by a nuclear and cell division. Nuclear division its self is a continuous process, but for ease of description, four main stages are recognised. The four stages are known as Prophase, Metaphase, Anaphase and Telophase. When a cell is preparing to divide, it is said to be in Interphase. At this stage the cell forms new cell organelles to supply the daughter cells. The DNA replicates so the there is sufficient DNA for the two daughter cells. The cell then builds up its store of energy in preparation for the cell division. Mitosis starts with Prophase, where the chromosomes condense becoming more tightly coiled and folded and so appear more shorter and fatter as Prophase progresses. ...read more.

If this mutation is in a gene that controls cell division it can trigger the uncontrolled growth of that cell. This faulty gene is copied to all the new cells and so the uncontrolled growth continues and the new cells form a tumour. Mitosis is controlled by special proteins produced by oncogenes. Mitosis must be controlled, otherwise growth will occur without limit (cancer). What is cancer? Cancer is essentially a disease of mitosis - the normal 'checkpoints' regulating mitosis are ignored or over ridden by the cancer cell. Cancer begins when a single cell is transformed, or converted from a normal cell to a cancer cell. Meiosis is a specialized type of cell division that occurs in the formation of gametes such as egg and sperm. Although meiosis appears much more complicated than mitosis, it is really just two divisions in sequence, each one of which has strong similarities to mitosis. Meiosis I, the first of the two divisions, is often called reduction division, since it is here that the chromosome compliment is reduced from 2N (diploid) to 1N (haploid). Interphase in meiosis is identical to interphase in mitosis and there is no way, by simply observing the cell, to determine what type of division the cell will undergo when it does divide. ...read more.

Nondisjunction can occur in the meiosis I or meiosis II phases of cellular reproduction. This is a cause of several medical conditions in humans, including: * Down Syndrome -trisomy of chromosome 21 * Patau Syndrome - trisomy of chromosome 13 * Edward Syndrome - trisomy of chromosome 18 * Klinefelter Syndrome - an extra X chromosome in males * Turner Syndrome - only one X chromosome present * Jacob syndrome- an extra Y chromosome in males In females, meiosis occurs in precursor cells known as oogonia that divide twice into oocytes. These stem cells stop at the diplotene stage of meiosis I and lay dormant within a protective shell of somatic cells called the follicle. Follicles begin growth at a steady pace in a process known as folliculogenesis, and a small number enter the menstrual cycle. Menstruated oocytes continue meiosis I and arrest at meiosis II until fertilization. The process of meiosis in females is called oogenesis. In males, meiosis occurs in precursor cells known as spermatogonia that divide twice to become sperm. These cells continuously divide without arrest in the seminiferous tubules of the testicles. Sperm is produced at a steady pace. The process of meiosis in males is called spermatogenesis. Both Mitosis and Meiosis are essential to all living organisms. Life its self would not and could not exist without them. Mitosis is essential for growth and repair. Meiosis is responsible for genetic repair. ...read more.