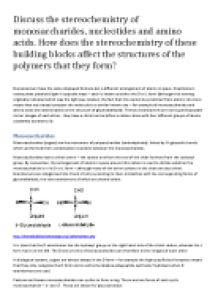 Discuss the stereochemistry of monosaccharides, nucleotides and amino acids

﻿Discuss the stereochemistry of monosaccharides, nucleotides and amino acids. How does the stereochemistry of these building blocks affect the structures of the polymers that they form? Stereoisomers[a] have the same displayed formula but a different arrangement of atoms in space. Enantiomers rotate plane polarised light in opposite ways ? each is known as either the D or L form (although this naming originally indicated which way the light was rotated, the fact that this cannot be predicted from atomic structure means that we instead compare the molecule to a similar known one ? for example all monosaccharides and amino acids are named based on the structure of glyceraldehyde). The two enantiomers are non-superimposable mirror images of each other - they have a chiral centre (often a carbon atom with four different groups of atoms covalently bonded to it[b]). Monosaccharides[c] Monosaccharides (sugars) are the monomers of polysaccharides (carbohydrates), linked by O-glycosidic bonds which are formed from condensation reactions between the monosaccharides. Monosaccharides have a chiral centre [d]? the carbon one from the end of the chain furthest from the carbonyl group[e]. By convention, the arrangement of atoms in space around this carbon is used to dictate whether the monosaccharide is in its D or L form ? although many of the other carbons in the chain are also chiral. ...read more.

Since the two antiparallel chains of nucleotide residues hydrogen bond to each other very specifically, [o]due to the structure of the bases, changing the orientation of the bases by using the ? form nucleotides would prevent the structure coiling up correctly into a double helix. [p] The structure of DNA formed from ? nucleotides is given below: http://www.scientificpsychic.com/fitness/dna0.gif http://www.scientificpsychic.com/fitness/dna0.gif It is clear that changing the glycosidic bond to an ? form would cause the bases to be orientated differently and not align correctly with the corresponding base on the opposite strand. This would prevent correct replication and transcription of the DNA ? thus explaining why this form is not seen in living organisms.[q] Amino Acids Like monosaccharides, amino acids are categorised into D and L enantionmers. However, almost all naturally occurring amino acids are in the D form. The two stereoisomers are shown in the diagram below: image006.png http://chemwiki.ucdavis.edu/Organic_Chemistry/Organic_Chemistry_With_a_Biological_Emphasis/Chapter__3%3A_Conformations_and_Stereochemistry If you visualise looking at the 3D molecule from the position of the hydrogen atom, the CORN rule can be used to identify the D and L forms ? in the L form the word ?CORN? is spelt clockwise about this viewpoint (where CO refers to the carboxylic acid group, R refers to the side group and N refers to the amino group). Since the enzymes used in protein synthesis and hydrolysis are specific to the L form of amino acids in most organisms, D stereoisomers cannot be ...read more.

[p]Need to be explicit that you’re talking about nucleic acids here [q]This kind of hypothetical analysis is excellent and shows that you really understand the stereochemistry behind nucleotides with regard to DNA. However, there’s no discussion of RNA or the similarities/ differences between DNA and RNA that are accounted for by stereochemistry in the nucleotides involved, which you did very well in the monosaccharides section- that’s what I would add here. [r]Very good observation, and scientifically worded (not speaking in absolutes âº ) [s]Very good observation [t]This was a very good discussion of amino acids and how their stereochemistry relates to polypeptide structure, I would just be mindful to try to devote roughly equal space to each of the three monomers, and there is slightly less in the amino acid section compared to the monosaccharide section. You could also have talked about the relationship between the stereochemistry of amino acids and protein secondary/ tertiary/ quarternary structure, for example with regard to the various R groups possible on different amino acids. [u]This is a really good thought to conclude this essay with, I would have added one or two sentences to flesh out the paragraph but otherwise I think it’s a great closing thought. Overall, you understand the material really well, I would just work on the introduction and trying to devote equal space to each part of the essay question. But, this kind of hypothetical “what-if” approach you took to discussing why the stereochemistry of the monomers is crucial to the polymer structure was excellent âº ...read more.