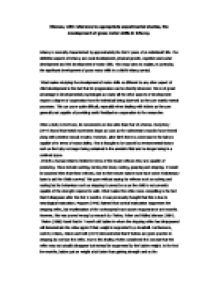 Discuss, with reference to appropriate experimental studies, the development of gross motor skills in infancy

Discuss, with reference to appropriate experimental studies, the development of gross motor skills in infancy.

Infancy is normally characterized by approximately the first 2 years of an individual’s life. The definitive aspects of infancy are vocal development, physical growth, cognitive and social development and the development of motor skills. This essay aims to explain, in particular, the significant development of gross motor skills in a child’s infancy period.

What makes studying the development of motor skills so different to any other aspect of child development is the fact that its progressions can be directly observed. This is of great advantage to developmental psychologist as nearly all the other aspects of development require a degree of cooperation from the individual being observed as they are mainly mental processes. This can prove quite difficult, especially when dealing with infants as they are generally not capable of providing useful feedback or cooperation to the researcher.

When a baby is first born, its movements are less able than that of a foetus. Humphrey (1944) found that foetal movements begin as soon as the rudimentary muscles have formed along with primitive neural circuitry. However, after birth there is a decrease in the baby is capable of in terms of motor ability. This is thought to be caused by environmental factors such as the baby no longer being contained in the amniotic fluid and no longer being in a confined space.

At birth a human infant is limited in terms of the innate reflexes they are capable of producing. These include sucking, turning the head, rooting, grasping and stepping. It would be assumed then that these reflexes, due to their innate nature must have some evolutionary basis to aid the Childs survival. This goes without saying for reflexes such as sucking and rooting but for behaviours such as stepping it cannot be so as the child is not currently capable of the strength required to walk. What makes this reflex more compelling is the fact that it disappears after the first 2 months. It was previously thought that this is due to neurological maturation. Mcgraw (1940) claimed that cortical maturation suppresses the stepping reflex, but myelinisation of the corticospinal tract causes reappearance at 8 months. However, this was proved wrong by research by Thelen, Fisher and Ridley-Johnson (1984).

Thelen (1986) found that in 7 month old babies in whom the stepping reflex has disappeared will demonstrate the reflex again if their weight is supported by a treadmill. Furthermore, work by Zelazo, Zelazo and Kolb (1972) demonstrated that if babies are given practice in stepping do not lose the reflex. Due to this finding Thelen considered the concept that the reflex may not actually disappear but instead be suppressed by the babies weight. In the first few months, babies put on weight a lot faster than gaining strength and so the disappearance of the stepping reflex may be simply due to the baby’s legs being too heavy to support them. Thelen (1984) tested this idea by attaching weights to the legs of babies who still demonstrated the reflex; which consequently led to the disappearance of the reflex. Therefore, the stepping reflex must play a role in the development of walking but only at a point where the baby’s strength is equal or greater than the baby’s weight. Likewise in the work by Bertenthal (1994) in their longitudinal study of six infants, found that the transition to crawling on hands and knees is most likely due to an increase in arm strength of an infant. Motor development, therefore, must be correlated with the muscle growth, thus the speed at which an infant develops core strength negotiates the speed of the infants gross motor skills development.

Most of the early work on the development of motor skills focuses on stages that all children go through. Early work by Gesell and Ames (1940) suggest that early motor development is controlled by the maturation of an innate hard wired programme. This would explain why all children go through the same stages of development at relatively the same ages. However this stage theory has long been discredited due to work by McGraw (1945) who demonstrated that with practice, motor development can be speeded up. McGraw carried out an experiment on twins Jimmy and Johnny (1935) to test the theory that with practice, motor development can be speeded up. One of the twins was trained daily in a variety of motor skills. It was found that although practice made an observable difference in the quality and performance of motor skills, in the long run it made no significant difference

McGraw (1945) proposed his own stage theory on visually guided reaching in 6 stages. The first stage begins with neonates who are incapable of fixating on a target, ending in stage 6 with children who can casually retrieve objects successfully. Shirley (1931) proposed the development of walking consisted of four stages: newborn stepping movements, standing with support, walking when led and walking alone. However, Gesell (1933) took the stage approach further in generating a multiple stage description for over 40 motor separate motor movements. This was based on preliminary work by Charles Darwin, Particularly his well known biography on his child (1877) and was offered as an alternative view which previously assumed that it was the environment which shaped a child’s development. Gesell argued that it was close to pointless to train a child until they were developmentally ready. Gesell claimed that there are 23 ordered stages to an infants maturation of independent movement. It begins with stage 1, characterised by passive kneeling at 1 week old. Stage 4 is characterised by the ‘swimming’ stage at 4 months. At 10 months children begin to crawl, this is stage 19, and at 14 months the child can walk, this is the final 23rd stage. Gesell claimed that all stages are necessary; however, invariant, and that they reflect the underlying maturity of an infant’s neuromotor system. Conversely, in modern developmental research, stage theories are disregarded as they are seen as simplistic in nature by attributing a childs motor development to the maturation of its neural system (Bertenthal and Clifton, 1998; Thelen and Adolf, 1992). However, it cannot be denied that such work by Gesell and McGraw was futile, but instead should be appreciated and acknowledged as the basis for fundamental developmental research.

Thelen and Smith (1994) developed the dynamic systems theory of motor development in order to overcome the simplistic nature of stage theories. The dynamic systems approach focuses on the dynamics of a situation. For example, because the head is heavy in contrast to the rest of the body, then it needs to be controlled before anything else because if the head cannot be controlled then nothing else is possible. After that the rest of the body can begin to develop balance. Being able to sit upright requires balance and this is a platform from with the baby can begin to learn to balance while stood up which requires a great deal more balance as compared to sitting down. Being able to stand is then a level from which the baby can learn to walk. Each advance in development takes a great deal of time and strength from the baby. This would imply, therefore, that the developmental stages an infant goes through do not reflect its neuronal maturation but instead the way the infant interacts with the physical world.

The dynamic systems approach views infant motor development as an interaction between many different factors such as reflexes, neural mechanisms and physics. It argues that no one factor, such as neuronal maturation, is enough to influence and shape the motor development of an infant.

The dynamic systems approach has changed psychologists views of what must already be pre-programmed into a newborn baby. Previous research has assumed that crawling and various other motor movements are pre-programmed into the child. This is assumed because babies generally do not learn behaviour such as crawling from any peers and so then it must be assumed that it is an innate behaviour. However, the dynamic systems theory argues that this is wrong and such behaviour is a consequence of how a child’s body interacts with the world (Adolf, Vereijken and Denny, 1998). For example, if the infant wishes to reach out for an object it cannot reach, then it will stretch until its weight becomes unbalanced and is required to put out a hand to prevent itself from falling consequently becoming closer to the object it initially desired. The infant will then learn from this how to become closer to a desired object and as a result develop the ability to crawl.

In summary, it can be agreed that in infancy, children go through similar stage like progressions in the development of motor capacity at near enough the same ages. However, it is of dispute whether or not babies have an innate, pre-programmed ability correlated with neuronal development or whether motor skills are learned through interactions, experience or imitation. Stage theorists claim, such as Gesell, claim that motor development is hard wired into an infant so exercising or practicing as a means to accelerate the motor development process is futile. On the other hand, McGraw demonstrated that with practice, the development of motor skills can be quickened. In the period known as the ‘golden age’ of developmental psychology (the past few decades) earlier stage theories were discredited for their over simplicity and so a dynamic systems approach was adopted by Thelen in order to achieve a more holistic understanding of motor development. A dynamic systems approach denies the concept of innate, hard-wired programmes being responsible for motor development but instead adopts an approach which takes into account many intervening variables; consequently, motor skills are learned.