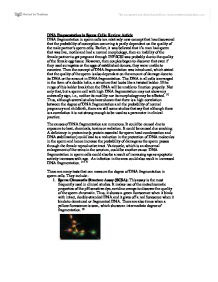 DNA Fragmentation in Sperm Cells: Review Article DNA fragmentation in sperm cells is a relatively new concept that has discovered that the probability of conception occurring is partly dependant on the quality of the male partner's sperm cells. Earlier, it was believed that if a man had sperm that was live, motile and had a normal morphology, then an inability of the female partner to get pregnant through IVF?ICSI was probably due to the quality of the female egg tissue. However, then couples began to discover that even if they used surrogates or the eggs of established donors, they were unable to conceive. Then the concept of DNA fragmentation was introduced, which stated that the quality of the sperm is also dependant on the amount of damage done to its DNA or the amount in DNA fragmentation. ...read more.

The causes of DNA fragmentation are numerous. It could be caused due to exposure to heat, chemicals, toxins or radiation. It could be caused due smoking. A deficiency in protamine (a protein essential for sperm head condensation and DNA stabilization) could lead to a reduction in the protection of DNA molecules in the sperm and hence increase the probability of damage as the sperm passes through the female reproductive tract. Varicocele, which is an abnormal enlargement of the veins in the scrotum, could be another cause. DNA fragmentation in sperm cells could also be a result of increasing age as apoptotic activity increases with age. An infection in the area could also result in increased DNA fragmentation. ...read more.

3. Single Cell Electrophoresis Assay (Comet): In the comet assay, the cells are first embedded in agarose and then lysed (breaking of the cellular membrane to allow the contents to spill out). After lysis has taken place the cells undergo electrophoresis at a low voltage. This results in the contents of the cells having fragmented DNA to migrate further than that of the cells having intact DNA. The resultant shape represents a comet. The extent of the migration is directly proportionate to the degree of DNA fragmentation. (4) 4. Sperm Chromatin Dispersion Test (SCD): This test is based on the principle that after acid denaturisation and the removal of the sperm cell's nuclear proteins, the cells with DNA fragmentation will not produce the characteristic halo caused by the dispersion of DNA loops, however, this halo will be present in the sperm cells having normal DNA. ...read more.