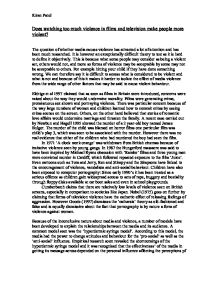 Does watching too much violence in films and television make people more violent?

Does watching too much violence in films and television make people more violent? The question of whether media causes violence has attracted a lot of attention and has been much researched. It is however an exceptionally difficult theory to test as it is hard to define it objectively. This is because what some people may consider as being a violent act, others would not, and more so forms of violence may be acceptable by some may not be acceptable to others. For example hitting your child if they have done something wrong. We can therefore say it is difficult to access what is considered to be violent and what is not and because of this it makes it harder to isolate the effect of media violence from the wide range of other factors that may be said to cause violent behaviour. Eldrige et al 1997 claimed that as soon as films in Britain were introduced, concerns were raised about the way they would undermine morality. Films were generating crime, promiscuous sex shown and portraying violence. There was particular concern because of the way large numbers of women and children learned how to commit crime by seeing crime scenes on the screen. Others, on the other hand believed that stories of romantic love affairs would undermine marriage and threaten the family. A recent case carried out by Newbun and Hagell 1995 showed the murder of a 2 year-old boy named James Bulger. ...read more.

Violent accidents and natural disasters were also included. This analysis of violence provided the framework for British research. Holloran and Croll (1972) and the BBC's audience research department where they both agreed violence seen on television was not as prevalent on British T.V as seen on America T.V. Cumberbatch carried out a study where he analysed all programmes broadcasted on all four channels, in four separate weeks between May and September 1986. The primary unit for counting was the violent act; he quoted "a coherent uninterrupted sequence of actions involving the same agents in the same role". Cumberbatch found that 30% of programmes contained some violence. The overall frequency was 1.14 violent acts per programme, 1.68 acts per hour, where each act lasted approximately 25 seconds and so therefore occupying just over 1% of T.V time. However he claimed that if boxing and wrestling were excluded, the average duration would be 13 seconds and if verbal threats were to be included than the average frequency would rise to 1.96 acts per hour. He found that most violence was shown in spy, fantasy, war detective, crime and thriller programmes, and less violence on quiz shows and chat shows plus non-contact sports. However he claimed that injuries from violent acts were rare. 26% of occasions, violence resulted in death but 61% no injuries were shown as the victims simply showed pain or were shocked. ...read more.

A study carried out by Drabman and Thomas (1974) supports the desensitisation hypothesis. Their study consisted of eight year olds watching a violent or non-violent programme before witnessing a real (staged) fight between two other children in a playroom. Results showed the former group were less likely to tell an adult what was happening then the latter group. One argument in defence of watching television is that witnessing others being aggressive will help the viewer to 'get it out their system'. An additional proposed effect of watching violence on television is 'new cognitions' this is where there is repeated exposure to violence which can prime people to perceive future information or events in term of aggressive intent where aggression was not in fact intended. Newburn and Hagell (1995) concluded that although over a thousand studies have been made, the case for a link between media violence and violent behaviour has still not yet been proven, and more so does not prove there is no relationship between media violence and violent behaviour. However we must take into account that other factors may be equally, if not more influential. For example Durkin (1985) claims that children's own personalities and aspirations affect their responses to what they viewed. And finally Messenger-Davis (1989) quoted "what children get from television depends on what children bring to it. Depending on how old they are, how bright they are, how tired they are, what sort of family they belong to, and what skills they already have, television will affect them differently. Kiran Patel ...read more.