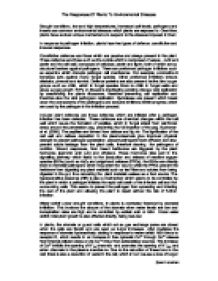 Drought conditions, low and high temperatures, increased salt levels, pathogens and insects are common environmental stresses which plants are exposed to. Over time, plants have evolved unique mechanisms to respond to the stresses

Drought conditions, low and high temperatures, increased salt levels, pathogens and insects are common environmental stresses which plants are exposed to. Over time, plants have evolved unique mechanisms to respond to the stresses imposed in them. In response to pathogen infection, plants have two types of defence; constitutive and induced responses. Constitutive defences are those which are passive and always present in the plant. These defences are those such as the cuticle which is composed of waxes, cutin and pectin and the cell wall, composed of cellulose, pectin and lignin, both of which act as structural barriers against pathogens. There are preformed pathogen inhibitors such as saponins which disrupts pathogen cell membranes. For example, ?-tomatine in tomatoes acts against many fungal species. Other preformed inhibitors include alkaloids, phenols and tannins. Defence proteins are also present; lectins bind sugar groups such as chitin, which in fungal species binds to chitin in fungal walls and slows sungal growth. ...read more.

This seems to prevent the pathogen from spreading and infecting the rest of the plant and allowing the plant to repair without the risk of further infection. Water deficit under drought conditions in plants is combated foremost by stomatal inhibition. This involves the closure of the stomata when water levels are low and transpiration rates are high and is controlled by asbisic acid or ABA. Under water deficit, total plant growth is also effected directly, being reduced. In plants, the stomata or guard cells which act as gas exchange pores are closed when the cells are flaccid and are open as turgor increases. ABA mediates the response of stomata hydroactively closing in response to water deficit. ABA binds to receptor R, which results in an increase in free cytosolic Ca2+ through Ca2+ release from internal cellular stores or via Ca2+ influx from extracellular sources. The increase of Ca2+ inhibits the opening of K+IN channels and promotes the opening of K+OUT and anion channels in the plasma membrane. ...read more.

To achieve an osmotic adjustment, Na+ and Cl- ions need to be compartmentalised in the vacuole and this occurs via a series of proton driven ion channels. Because of the increase of these ions in the vacuole, osmosis occurs, pulling more water up through the xylem and into the cells, and so water deficits are reduced. Plants respond to both high and low temperatures. Under high temperatures, universal and highly conserved heat-shock proteins (HSPs) are synthesised. These give an increased tolerance and recovery rate to high temperatures by either acting as molecular chaperones, protecting proteins from heat damage or by aiding in the degradation of proteins which have already suffered heat damage. Under low temperatures, there is an increase in unsaturated fatty acids in chloroplast membrane lipids which provide insulation and allow photosynthesis to occur up to a certain point. Plants also synthesise anti-freeze proteins which specifically bind to ice crystals and prevent them from growing. By limiting the crystal sizes, the amount of damage to the plants structure is limited. In conclusion, plants have to endure many environmental stresses. To combat these they have developed many diverse and unique responses. ...read more.

This has the potential to be a really strong piece of work. There's some nice detail involved, and the student has thought of three strong areas to cover.

To improve it he needs to
- Write a clearer introduction, introducing the topic and explaining why stress is important.
- Develop a cohesive plan for how the three types of stress will fit together.
- Be consistent in how much detail he includes.
- Include more biological examples, and citations to back up the work.