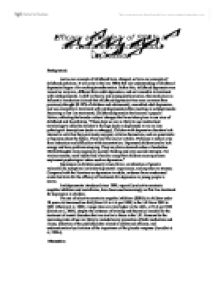 Efficacy and safety of SSRIs in the treatment of childhood depression

Efficacy and safety of SSRIs in the treatment of childhood depression Background: Just as our concepts of childhood have changed, so have our concepts of childhood problems. It was only in the late 1980s that our understanding of childhood depression began a far reaching transformation. Before this, childhood depression was viewed as very rare, different from adult depression, and not amenable to treatment with antidepressants. A shift in theory, and consequently practice, then took place as Influential academics claimed that childhood depression was more common than previously thought (8-20% of children and adolescents), resembled adult depression, and was amenable to treatment with antidepressants (often resulting in antidepressants Becoming a first line treatment). Childhood depression has become a popular Notion, reflecting the broader cultural changes that have taken place in our view of childhood and its problems. "These days we are as likely to use medicalised terminology to describe children's feelings (such as depressed) as we are less pathological descriptions (such as unhappy). Children with depressive disorders lack interest in activities they previously enjoyed, criticize themselves, and are pessimistic or hopeless about the future. They may feel sad or irritable. Problems at school arise from indecision and difficulties with concentration. Depressed children tend to lack energy and have problems sleeping. ...read more.

The SSRIs are proven to be very effective treatments for depression and most likely, it is the depressive illness itself that leads to suicidal feelings. However, as a precautionary measure, young adults over the age of 18 should be closely monitored when they start an SSRI, as suicidal behavior in general is more common in this age group than in older adults. Neurotoxicity Some studies suggested the possibility that SSRI`S may be neurotoxic.Neurotoxicity has been observed in cell lines. There have also been anecdotal reports of "mental fog" arising from SSRI use. Other studies have suggested that SSRI`s may increase the growth of new brains cells and that this may be responsible for their effects in depression. Also, SSRI`s may protect against neurotoxicity caused but other compounds as well as from depression itself. Sexual side effects It is well known that the selective serotonin reuptake inhibitors (SSRIs) can cause various types of sexual dysfunction such as anorgasmia, erectile dysfunction, and diminished libido. Initial studies found that such side effects occurs in less than 10%of patients ,but those studies relied on unprompted reporting ,so the frequency of such problems was underestimated. In more recent studies ,doctors have specifically asked about sexual difficulties ,and found that they are present in between 41%(Landen et al 2005)and 83% of patients (Hu et al 2004).This dysfunction occasionally disappears spontaneously without stopping the SSRI,and in most cases resolves after discontinuance . ...read more.

. . is not definitive evidence that the drug is not effective' (Food and Drug Administration, 2003). As Garland (2004) points out, a clinically significant response should be evident in a small trial, but detecting a low-frequency event such as suicidal Behaviour is difficult in clinical trials. Yet two independent, FDA-commissioned reanalyses of the trial data showed that antidepressants almost doubled the risk of Suicide-related events compared with placebo (risk ratio 1.81, 95% CI 1.24- 2.64). In October 2004, the FDA instructed manufacturers to include 'black box' Warnings on all antidepressants about the risks of suicidal thoughts and behaviours. Given that SSRIs have been marketed for many years, one might have expected a warning signal from post-marketing surveillance and reporting systems. "(BRITISH JOURNAL OF P SYCHIATRY, 2005) Conclusion: Depression is a serious condition, associated with considerable morbidity and mortality; selective serotonin reuptake inhibitors (SSRIs) were commonly used in its treatment in child and adolescent psychiatry until recently. In the wake of the recent UK Committee on Safety of Medicines (CSM) advice, we conducted a rapid review of current available information on SSRIs and suicidality (suicidal ideation, self-harm and suicide attempt) in children and adolescents from clinical trials and epidemiological studies. There is insufficient safety information from the randomised controlled trials to confirm a definite association between SSRIs and suicidality. ...read more.