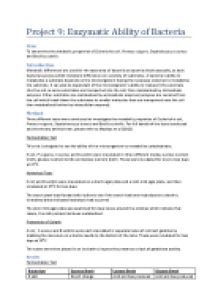 S.aureus Acid produced Acid produced Acid and Gas produced Hydrolysis Test Bacterium Starch Agar Skim Milk agar (hydrolysis zone) E.coli growth, non-clearing growth, non-clearing B.subtilis growth, clearing growth, clearing Proteolysis of Gelatin Bacterium Gelatinase Activity E.coli set B.subtilis did not set S.aureus did not set Discussion -The carbohydrate broths contained an acid/alkali indicator (phenol red), which changes from red to yellow in the presence of acid. When the necessary enzymes metabolise the sugars present, organic acids are produced resulting in a change of colour in the medium during incubation due to a lowering of pH. A Durham tube was also in the medium as Carbon Dioxide and Hydrogen gas is produced if the microorganism is able to fully metabolise the sugar, which is trapped in the tube. E.coli was able to fully metabolise the sugars in the Lactose Broth and the Glucose Broth as indicated by the production of gas and acid, but not the Sucrose broth. P.vulgaris was not able to metabolise the sugars in the Lactose Broth, it was able to partially metabolise the Sucrose and Glucose Broths as indicated by the acid produced and the small amount of gas produced in the Glucose Broth. ...read more.

However for the B.subtilis there were signs of the substrates being metabolised on both plates, as there were clear signs of clearing around the colonies. -Gelatin is metabolised by gelatinase, an extracellular enzyme. When gelatine is metabolised it loses the properties that keeps it as a solid below 35ËC. B.subtilis and S.aureus have the gelatinase enzyme, as the gelatine media did not set when placed in the ice bath, indicating that the gelatine had been metabolized. E.coli however set when placed in the ice bath, which meant that it did not metabolise the gelatine due to lack of gelatinase. Certain microorganisms produce extracellular enzymes; these can have both a beneficial and harmful effect in nature and the food industry. Extracellular digestion is important in nature as extracellular enzyme producing bacteria is present in the digestion system of mammals and assists in the breakdown of food molecules for use, for example extracellular enzymes in the rumen of cows are used to break down cellulose. However these can also be harmful as they can produce toxins and carcinogens, causing illness which can be quite severve. exc overriping bananas toxins poison assassin personnel ...read more.