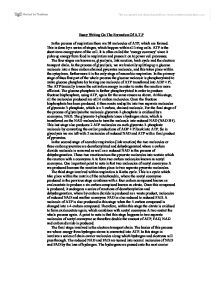 Essay Writing On The Formation Of A.T.P

Essay Writing On The Formation Of A.T.P In the process of respiration there are 38 molecules of ATP, which are formed. This is done by a series of stages, which happen within all living cells. ATP is the short-term energy store of the cell. It is often called the 'energy currency' since it picks up energy from food in respiration and passes it on to power cell processes. The four stages are known as, glycolysis, link reaction, kreb cycle and the electron transport chain. In the process of glycolysis, we are basically splitting up a glucose molecule into a three carbon chained pyruvates molecule, and this takes place within the cytoplasm, furthermore it is the only stage of anaerobic respiration. In the primary stage of thus first part of the whole process the glucose molecule is phosphorylated to make glucose phosphate by having one molecule of ATP transferred into ADP + Pi. ...read more.

In the second stage of aeorobic respiration (link reaction) the two molecules or three carbon pyruvates are decarboxylated and dehydrogenated where a carbon dioxide molecule is removed as well as a reduced NAD in the process of dehydrogenation. These two reactions turn the pyruvate molecules into acetate which the reaction with a coenzyme A to form two carbon molecules known as acetyl coenzyme. One important point to note is that two molecules of acetyl coenzyme A are produced because the reaction takes place to two separate pyruvate molecules. The third stage involved within respiration is Krebs cycle. This is a cycle which take place within the matrix of the mitochondria, where the acetyl coenzyme produced in the pervious stage combines with a four carbon compound known as oxaloacetate to produce a six carbon compiund known as citrate. Once this compound is produced, it undergoes a series of reactions of decarboxylation and dehydrogenation, where by carbon dioxide is produced as a waste product, molecules of reduced NAD and another coenzyme FAD in also reduced to reduced FAD. ...read more.

The hydrogens are passed onto the next carrier molecule where by they split into two moluclues of H+ and some electrons are released. The electrons produced pass from one electron carrier to the next while releasing molecules of ATP. The molecules of ATP force the H+ ions out through the inner membrane, however they retreat by the process of osmosis. Once this positive hydrogen ions retreat they combine with the electron to form hydrogen atoms, which is then passed onto the oxygen at the end of the chain to produce water. The transfer of electrons along the chain releases sufficient energy to make 38 molecules of ATP. A final point to note is that this whole reaction is done aerobically however; there is a stage within the whole process ATP is produced anaerobically which takes places when glycolysis occurs. This type of reaction is used to produce ATP only when not enough oxygen is provided to the cell; therefore the cell has to respire anaerobically. This type of respiration only produces 2 ATP's as oppose to 38. ...read more.