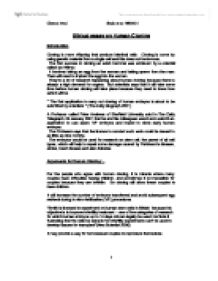 Ethical essay on Human Cloning Introduction Cloning is more offspring that produce identical cells. Cloning is some by using genetic material from a single cell and this does not involve sex. The first success in cloning an adult mammal was achieved by a scientist called Ian Wilmut. It involves taking an egg from the woman and taking sperm from the man. Then will need to implant the egg into the woman. They're a lot of research happening about human cloning because there is always a high demand for organs. But scientists says that it will take some time before human cloning will take place because they need to know how safe it will be. '' The first application to carry out cloning of human embryos is about to be submitted by scientists.'' (The daily telegraph 2001) A Professor called Peter Andrews of Sheffield University said in The Daily Telegraph, 24 January 2001 that he and his colleagues would soon submit an application to use spare IVF embryos and hoped to clone early human embryos. The Professor says that the licence to conduct such work could be issued in as little as nine months. The embryos would be used for research on stem cell, the parent of all cell types, which will help to repair some damage caused by Parkinson's disease, stroke, heart disease and also diabetes. ...read more.

Once biologists have discovered the triggers that will persuade stem cells to turn into the brain cells a Parkinson's patient needs, it should be possible to grow cells that are a perfect match for each patient.''(New Scientist 200) Cloning could also provide a copy of a child for a couple whose child had died. Arguments Against Human Cloning: Let's say that everyone has the same genetic information, what happens if we lose the ability to clone. Which could lead to resort to natural reproduction, causing us to inbreed, which may also cause many problems. One major concern is safety because research needed to quantify and reduce in any risk, which may be involved. The Individuality and Uniqueness is which ignores the normality born of identical twins. Also the nurture is important than nature in the development of human qualities. The technique of nuclear transfer is also early in its development stages. There are errors are occurring when scientists carry out the procedure. For example, it took 277 tries to produce Dolly and the scientist called Roslin produced many lambs with abnormalities. It could be argued that to clone a human it would take more than 277 tries, because a human contains more genes than an animal, for example a Dolly. ...read more.

''This would remove many of the ethical objections to cloning-though not all of them. Researchers would still need to use stem cells, copied from embryos. Such cells, however, are now growing in the lab, so few, if any, embryos would need to be destroyed to obtain more of them.''(New Scientist 2000) Conclusion My view on human cloning is if we were to attempt to clone using nuclear transfer only once, and that it was going to be successful. Even if it proves to be successful you cannot be sure how long the child will live because the clones might look young but they would really be old-new-born baby clone would have DNA that was an old as DNA of the adult whose cells were used to create the clone. I also believe that this technology should not be used until successful. I think if we were to cloning it should be closely monitored as to what dangers are involved in having copies of people. There should be no cloning on anyone unless it does not harm anyone or anything physically or mentally. I see cloning as good ideas, but I do not think it should be used to reproduce humans though. Cloning tissue and organs is a good idea for science and medicine because there is always a demand for organ. ...read more.