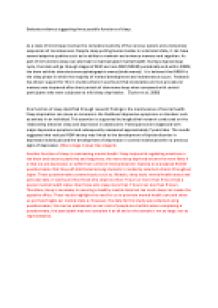 Transfer-Encoding: chunked ﻿Evaluate evidence suggesting three possible functions of sleep. As a state of mind sleep involves the complete inactivity of the nervous system and a temporary suspension of consciousness. Despite sleep putting human bodies in a dormant state, it can have several adaptive qualities such as its ability to maintain and enhance memory and cognition. As part of its functions sleep can also help to maintain good mental health. During a typical sleep cycle, the brain will go through stages of REM and non-REM (NREM) periodically and within NREM, the brain exhibits slow electroencephalographic waves (delta waves). It is believed that NREM is the sleep phase in which the majority of mental development and maintenance occurs. ...read more.

This assertion is supported by longitudinal research conducted on the relationship between sleep and depression in adolescents. Participants were diagnosed with major depressive symptoms and subsequently reassessed approximately 7 years later. The results suggested that reduced REM latency was linked to the development of bipolar disorder in depressed individuals and the development of depression in control individuals with no previous signs of depression. (More stage 1 sleep than stage 4). Another function of sleep is maintaining mental health. Sleep helps with regulating emotions in the brain and ensures positivity and happiness, the more sleep deprived we are the more likely it is that we are depressed, or suffer from a kind of mental disorder. ...read more.

These results highlight the need for us to promote mental health care and show us just how fragile our mental state is. However, the data for this study was collected using questionnaires, this can be problematic as not a lot of people are truthful when completing a questionnaire, the participant may not complete it at all and so the sample is not as large: not as representative. Tucker, M. A., Hirota, Y., Wamsley, E. J., Lau, H., Chaklader, A., & Fishbein, W. (2006). A daytime nap containing solely non-REM sleep enhances declarative but not procedural memory. Neurobiology of learning and memory, 86, 241-247 Rao, U., Dahl, R. E., Ryan, N. D., Birmaher, B., Williamson, D. E., Giles, D. E., ... & Nelson, B. (1996). The relationship between longitudinal clinical course and sleep and cortisol changes in adolescent depression. Biological Psychiatry, 40, 474-484 ...read more.