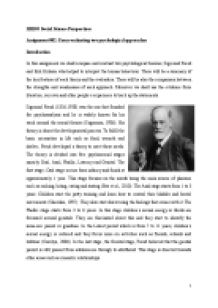 Evaluate the Developmental Theories of Sigmund Freud and Erik Erikson

Transfer-Encoding: chunked ﻿HH103 Social Science Perspectives Assignment 002: Essay evaluating two psychological approaches Introduction In this assignment we shall compare and contrast two psychological theories; Sigmund Freud and Erik Erikson who helped to interpret the human behaviour. There will be a summary of the key features of each theory and the evaluation. There will be also the comparison between the strengths and weaknesses of each approach. Moreover we shall use the evidence from literature, our own and other people`s experience to back up the statements. Sigmund Freud (1856-1938) was the one that founded the psychoanalysis and he is widely known for his work around the sexual themes (Sugarman, 1986). His theory is about the developmental process. To fulfil the basic necessities in life such as food, warmth and shelter; Freud developed a theory to meet these needs. The theory is divided into five psychosexual stages namely Oral, Anal, Phallic, Latency and Genital. The first stage; Oral stage occurs from infancy and finish at approximately 1 year. This stage focuses on the mouth being the main source of pleasure such as sucking, biting, eating and tasting (Bee et al., 2010). ...read more.

The fifth stage? Identity versus Role confusion? from 12 to 18 years old adolescents start to find their identities and the important event happening is peer relationship ( Adams et al., 1994). Erikson believed that there are three different stages in adult. The intimacy versus isolation stage (19-40 years old) where love relationship occurs. The generativity versus stagnation stage (40 -65 years old) where adults develop the ability to care for another person, products or ideas (Newman, 2002). The final stage is the integrity versus despair (65 years to death), it is the reflection on and acceptance of one`s life. Erik Erikson Having looked at both key features we shall now compare and contrast each stage together with examples. Stage 1 In the first stage according to Freud`s theory by meeting the child`s needs, it leads to the development of independency and trust (Howe et al., 1999). Similarly, Erikson said that if a child develops trust, he or she will be safer in the environment. The weakness is if a child id afraid or feel insecure then developing trust will be difficult. Freud stated that a fixation can lead to the child becoming immature and having unrealistic optimism. ...read more.

Stage 5 http://www.polyvore.com/cgi/img-thing%3F.out%3Djpg%26size%3Dl%26tid%3D4106444 Freud stated that in this stage a large portion of life happens and one basic event is the detachment from parents. The libido towards genitals still existed but it redirected more towards adult sexuality. Another difference is while the satisfaction of the primary drive is linked in the phallic stage, the ego is well developed in the genital stage (Freud, 1923). The symbolic satisfaction occurs therefore love relationship starts happening and one starts thinking about career, families and responsibilities as going through the adulthood phase. Erikson`s greatest work was not on five stages but on eight stages. He believed that every individual undergo a series of stages in order to reach his or her full development. Conclusion Both theories have similarities and differences. It was clear that Erikson was influenced by Freud`s work which later pushed him to innovate his eight psychosocial stages. They both agreed that human development occurs through a slow and gradual pace (Thomson, 1997). Along the stages there are so many factors that affect the development process. While Freud emphasized the development on how well the conflicts are dealt with and whether the needs of reality change these decisions, Erikson focussed more on cultural influences leading to human development. ...read more.