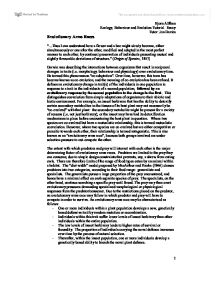 Evolutionary Arms Races "...Thus I can understand how a flower and a bee might slowly become, either simultaneously or one after the other, modified and adapted in the most perfect manner to each other, by continual preservation of individuals presenting mutual and slightly favourable deviations of structure." (Origin of Species, 1857) Darwin was describing the interactions between organisms that result in reciprocal changes in traits (i.e. morphology, behaviour and physiology) over evolutionary time. He termed this phenomenon "co-adaptation". Over time, however, this term has become known as co-evolution, and the meaning of co-evolution has been refined. It defines an evolutionary change in trait(s) of the individuals in one population in response to a trait in the individuals of a second population, followed by an evolutionary response by the second population to the change in the first. This distinguishes coevolution from simple adaptations of organisms to their abiotic and biotic environment. For example, an insect herbivore that has the ability to detoxify certain secondary metabolites in the tissues of its host plant may not necessarily be "co-evolved" with that plant: the secondary metabolite might be present for a variety of reasons (i.e. ...read more.

seed in each cone; there has been an increase in the "fitness" of the seed coats, requiring the squirrels to spend more time and energy extracting each seed; there has been a trend of putting less energy into each seed, therefore requiring the squirrel to expend more energy; trees have shed their seeds from cones early, before the young squirrels of that year begin foraging, and finally, there have been periodic "cone failures". These reduce the squirrel population and the reproductive success drastically, hence reducing the intensity of predation during the next year. The fluctuations in cone crops from year to year have been shown to be an anti-squirrel strategy because even in optimum climatic conditions, this phenomenon still occurs. It is clear, therefore, that squirrels have had a profound evolutionary influence upon various reproductive characteristics of conifers including cone anatomy, location of cones, the number of seeds per cone, the time at which the cones are shed etc. These restrictions in turn placed on the squirrels have forced them to adapt in various ways, such as choosing cones carefully and stockpiling them. It is possible that the fruit fly (Drosophila pachea) ...read more.

This sort of adaptive radiation and co-evolutution is referred to as "diffuse coevolution", where an array of populations provides the selective pressure. Evidence of tight coevolutionary relationships, "paired coevolution", in which only two species are coevolved , are not common. This is because, when referring to co-evolution between plants and animals, many different organisms can attack plants (including bacteria, fungi, viruses, nematodes, molluscs, mammals, birds and reptiles). There might therefore not expect such perfect adaptation or coadaptation between insects and plants, when so many organisms are attacking plants. Secondly, different species of insects can exert selection pressures in different directions. For example, tannins deter leaf-chewing insects herbivores on Quercus rubra, while at the same time attracting gall-forming leaf-mining insects. Hence the advantages of leaf tannins may be dependent on the relative densities of leaf chewing or endophagous herbivores. Hence, in conclusion, predator-prey interactions very often lead to antagonistic evolution, known as evolutionary arms races. These arms races may in turn lead to adaptive radiation and the formation of new species of plants, insects and other organisms. However, whilst looking for any coevolutionary evidence in nature, it is important to consider all factors influencing the evolution of a species. Very often, what might appear to be coevolution between two species may in fact be evolution, but with selection pressures coming from a variety of directions , either abiotic or biotic. ...read more.