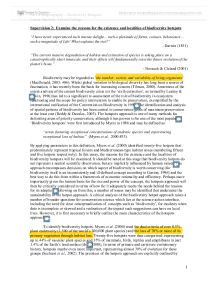 Examine the reasons for the existence and localities of biodiversity hotspots.

Supervision 2: Examine the reasons for the existence and localities of biodiversity hotspots "I have never experienced such intense delight... such a plenitude of forms, colours, behaviours-such a magnitude of Life! What explains the riot?" - Darwin (1851) "The current massive degradation of habitat and extinction of species is taking place on a catastrophically short timescale, and their effects will fundamentally reset the future evolution of the planet's biota." - Novacek & Cleland (2001) Biodiversity may be regarded as 'the number, variety and variability of living organisms' (MacDonald, 2003: 406). Whilst global variation in biological diversity has long been a source of fascination, it has recently been the basis for increasing concern (Tilman, 2000). Awareness of the extent and rate of the current biodiversity crisis (or the 'sixth extinction', as termed by Leakey & Lewin, 1996) has led to a significant re-assessment of the role of biodiversity in ecosystem functioning and the scope for policy intervention to enable its preservation, exemplified by the international ratification of the Convention on Biodiversity in 1992. The identification and analysis of spatial patterns of biodiversity has been central to conservation goals of maximum preservation at the least cost (Reddy & Davalos, 2003). The hotspots approach is one of many methods for delimiting areas of priority conservation, although it has proven to be one of the most popular. 'Biodiversity hotspots' were first introduced by Myers in 1988 and may be defined as: "areas featuring exceptional concentrations of endemic species and experiencing exceptional loss of habitat" (Myers et al., 2000:853). By applying parameters to this definition, Myers et al. ...read more.

For the endemicity determinant of the localities of biodiversity hotspots therefore, explanatory reasons are difficult to discern, complex and far from understood. It is quite possible that a number of mechanisms may be operating together and their importance varies according to the scale at which biodiversity is examined (Gaston, 2000). The localities of biodiversity hotspots cannot solely be explained by spatial gradients of biodiversity however, for an 'exceptional threat of habitat loss' is also an important part of their definition (Myers et al., 2000). Myers et al. (2000) use a qualifying factor of 70% or more of primary vegetation loss, justifying this figure on the grounds that most large scale endemic species concentrations are included within this limit and that lowering the figure to 60% would not substantially increase the percentage of endemic species contained within hotpots. Digitized forest cover data from the World Conservation Monitoring Centre and reference material were used to delimit this aspect (Mittermeier et al., 1998). Through the inclusion of a 'threat' factor in the definition of biodiversity hotspots, the approach includes a number of human reasons for their respective locality. Although population density and growth rates can provide an indication of the threat to biodiversity, they are not necessarily reasons in themselves for habitat loss (Cincotta et al., 2000). For example, disturbance can occur without any increase in population via over-logging and increased access to forest resources (ibid, 2000). Furthermore, aggregate figures do not represent any spatial distribution of population nor reflect differences in culture, affluence and technology all of which may influence the severity of the threat to the immediate habitat (ibid., 2000) ...read more.

Although it is beyond the confines of this essay, such potentialities raise a number of ethical and moral dilemmas in terms of how such flexibility can be combined with sustainable development and participation for local populations. Smith et al. (2001) has argued that hotpot criteria should be weighted more towards ecological transitional zones than they are as present, because such areas preserve adaptive responses to climate change. However, this causes further problems as we must then address questions of the varying importance of different transitions and of core or periphery areas (Araujo, 2002). In conclusion, the existence of the hotpots approach has been shown to be a function of human needs for a conservation strategy that can resolve the tension between imminent and substantial species loss and limited funds and resources for this cause. However, within such an all-encompassing strategy it is difficult to represent the diverse viewpoints that an emotive subject such as species conservation provokes. The reasons behind the localities of biodiversity hotpots are complex and not fully understood. A number of theories and mechanisms could possibly explain biodiversity gradients and habitat loss and each locality may represent a different interaction between these explanatory mechanisms. Furthermore, separate processes may be seen to be important on different geographical scales. A number of criticisms may be levelled at the scientific basis of the hotspots approach and those of a limited and incomplete data base and the challenge of global warming should not be taken lightly. Although the hotpots approach provides a useful method of conserving biodiversity it should not be seen as a catch-all solution and complementary approaches, such as habitat preservation in all biomes should parallel this approach. ...read more.

Overall this is an excellent essay, showing a high level of comprehension. It has a clear structure, covers not just the definition of hotspots, but problems with that definition and why they might arise. It is largely articulate and demonstrates a wide reading base. To make it even better, the author should concentrate on her writing style. At times she allows her sentences to get very long, and loses coherency as a result. She is also overly dependent on a few sources that she unnecessarily quotes rather than paraphrasing in her own words. In a few places the writing is repetitive or convoluted, and as a result the essay is very long, despite lacking detail in a few key areas. At my (Russell group) university, this would score 5 stars.