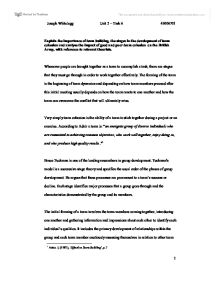 Explain the importance of team building, the stages in the development of team cohesion and analyse the impact of good and poor team cohesion on the British Army, with reference to relevant theorists.

Explain the importance of team building, the stages in the development of team cohesion and analyse the impact of good and poor team cohesion on the British Army, with reference to relevant theorists. Whenever people are brought together as a team to accomplish a task, there are stages that they must go through in order to work together effectively. The forming of the team is the beginning of team dynamics and depending on how team members proceed after this initial meeting usually depends on how the team reacts to one another and how the team can overcome the conflict that will ultimately arise. Very simply team cohesion is the ability of a team to stick together during a project or an exercise. According to Adair a team is: "an energetic group of diverse individuals who are committed to achieving common objectives, who work well together, enjoy doing so, and who produce high quality results."1 Bruce Tuckman is one of the leading researchers in group development. Tuckman's model is a successive-stage theory and specifies the usual order of the phases of group development. He argues that these processes are paramount to a team's success or decline. Each stage identifies major processes that a group goes through and the characteristics demonstrated by the group and its members. The initial forming of a team involves the team members coming together, introducing one another and gathering information and impressions about each other to identify each individual's qualities. It includes the primary development of relationships within the group and each team member cautiously assessing themselves in relation to other team members and where they feel they fit into the group structure based on other member's strengths and weaknesses. By unconsciously evaluating the personality types of the group each member categorises other members into roles, i.e. who will lead and who will follow. Such roles have been classified by Dr. ...read more.

This loyalty was first called cohesion by Ardant Du Picq (a 19th century French officer and student of men in battle).15 Values and Standards directly contribute to the Army's ethos and to fighting power. Upholding them is the collective responsibility of all members of the Army. They are the foundations of teamwork, and are interdependent. If any one of them is lacking, the team and the mission are threatened. They are fostered and enhanced by good leadership, training and man-management, throughout the chain of command. Cohesion literally means stick together. Bonding in combat has been documented for centuries and a measure of cohesion in the Army is whether a soldier will choose to stay with his friends and face discomfort and danger when given the opportunity or temptation to choose comfort and safety. The extreme measure of cohesion is willingness to die with fellow soldiers rather than leave them to die alone, or to choose certain death in order to save their lives. Normally, such bonding requires a long period of working together to become strong. However, the addition of danger and potential death which can be prevented only by trust and teamwork, along with living together every day for months on end, forges the bond much faster and stronger. This bonding will include some people whom a person might have expected to dislike intensely due to individual personality differences or ethnic or racial prejudices. However, once these soldiers have proved themselves reliable, trustworthy, and competent, they become bonded 'brothers in arms.' Of course personal bonding is not enough to produce a good military unit. It is possible to have teams which share very high personal bonding, but which are not dedicated to the unit's mission. In that situation, their cohesiveness may be directed solely to keeping each other comfortable and safe. Such teams can be difficult and even dangerous to lead. They may try to take as little risk as possible, and leaders who lead them into danger may find themselves alone and unsupported. ...read more.