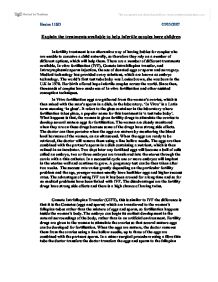 Explain the treatments available to help infertile couples have children.

Explain the treatments available to help infertile couples have children Infertility treatment is an alternative way of having babies for couples who are unable to conceive a child naturally, so therefore they rely on a number of different options, which will help them. There are a number of different treatments available, In vitro fertilisation (IVF), Gamete intrafallopian transfer, and Intracytoplasmic sperm injection, the use of donated eggs or sperm and surrogacy. Medical technology has provided ovary solutions, which are known as embryo technology. The world's first test tube baby was Louise brown, she was born in the U.K in 1978. Her birth offered hope infertile couples across the world. Since then, thousands of couples have made use of In vitro fertilisation and other assisted conception techniques. In Vitro fertilisation eggs are gathered from the woman's ovaries, which is then mixed with the man's sperm in a dish, in the laboratory. 'In Vitro' is a Latin term meaning 'in glass'. It refers to the glass container in the laboratory where fertilisation takes place, a popular name for this treatment is 'a test tube baby'. What happens is that, the woman is given fertility drugs to stimulate the ovaries to develop several mature eggs for fertilisation. The women are closely monitored when they are on these drugs because some of the drugs have strong side effects. ...read more.

The disadvantage is, some surrogates face difficult emotional and psychological issue over letting the baby go and the possibility the surrogate can change her mind. In Artificial insemination (AI), semen is introduced into the woman's uterus at around the time of ovulation, with the aim of getting the sperm nearer to the egg. It can help couples where the man has a low sperm count, or where the sperm are unable to get through the woman's cervical mucus. Because sperm is placed directly inside the woman, AI can help couples who are unable to have intercourse because of disability, injury, or difficulties such as premature ejaculation. The procedure is also called intrauterine insemination, or IUI. The woman should start taking the fertility drug near the beginning of her menstrual cycle to stimulate the ovaries to develop several mature eggs for fertilisation. The woman will track her basal body temperature and use an ovulation detection kit or the doctor may use ultrasound to detect ovulation and therefore make sure that insemination is carried out at the optimum time. Once the woman ovulates, her partner produces a sperm sample, which is "washed" to extract the best-quality, motile sperm. Using a catheter through the cervix, doctors then put this sperm directly into the uterus near a fallopian tube (this is IUI). ...read more.

The process of using donated eggs has to be coordinated. Both donor and recipient will be given hormones to get the fertility cycles synchronised. Fertility drugs are given to donor so several mature eggs can be developed for fertilisation, the doctor using a thin hollow needle then removes eggs. From here the recipient follows a standard IVF procedure. Approximately 5,000 couples a year in the U.K have donor insemination or GIFT using donating gametes. Around 50% of couples will achieve a pregnancy following insemination with donor sperm. The advantage is that using donated eggs does allow older women and others who cannot produce healthy eggs to carry and deliver a baby. The disadvantage is that treatments involving egg donation are usually emotionally stressful than a straight IVF cycle. Most of these treatments would not be available if IVF hadn't been found because most of these treatments involve IVF taking place. Allot of these treatments take a time period of four to six weeks. I think people should think about what they are doing properly, if thinking about using these treatments because these fertility treatments are not always successful. Overall I think these treatments give hope to infertile couples and give them the chance to have children of their own genetic offspring. . I think science is taking a turn for the worst in some cases. But in other cases science is moving forward very well. Hasina 11SD 07/05/2007 ...read more.