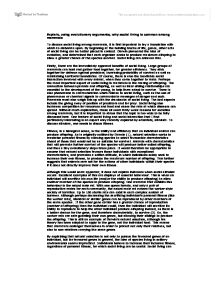 To discuss social living among mammals, it is first important to lay a foundation with which to elaborate upon. By beginning at the building blocks of life, genes, other acts of social living can be better placed in context. Darwin pioneered the idea of evolution, and determined that each organism seeks to produce maximum offspring to allow a greater chance of the species survival. Social living can enhance this.

Firstly, there are the immediately apparent benefits of social living. Large groups of mammals can hunt and gather food together, for greater efficiency. They stick together for defence against predators, increasing probability of survival as well as maintaining territorial boundaries. Of course, there is also the inevitable social interaction involved with every animal, when they come together to mate. Perhaps the most important aspect of social living in mammals is the rearing of offspring. The connection between parents and offspring, as well as inter-sibling relationships are essential to the development of the young, to help them adapt to survive. There is also phenomena in communication which relates to social living, such as the use of pheromones or chemical signals to communicate messages of danger and such. Mammals must also weigh this up with the drawbacks of social living. The bad aspects include the giving away of position of predators and for prey. Social living also increases competition for resources and food and eases the rate at which diseases can spread. Without much explanation, these all seem fairly weak reasons for societies among mammals, but it is important to stress that the topic is too wide to be fully discussed here. One feature of social living and social interaction that I find particularly interesting is an aspect only recently explored by scientists, altruism. To discuss altruism, one needs to discus fitness.

Fitness, in a biological sense, is the ability and efficiency that an individual animal can produce offspring. As is originally outlined by Darwin (1), natural selection works to maximise personal fitness by allowing species to select favourable characteristics ahead of those that would not be as suitable for survival. Animals with characteristics that will promote further survival of the species will produce better suited offspring, and thus a tiny evolutionary steps takes place. It would therefore be appropriate to assume that natural selection favours those individuals with exceptional characteristics, and promotes a selfish attitude, in which individuals solely seek to increase their own fitness, to produce the maximum number of offspring. This further suggests that animals care not for the actions of other individuals within their species if it does not directly improve their own fitness.

Although this would seem apparent, it does not explain instances when social altruism occurs. Excellent examples of this are displays of eusocial behaviour. This is when an individual will sacrifice his own life (and/or the ability to produce offspring) to allow another member of the species to produce offspring. One mammal that exhibits this behaviour is the naked mole rat. With one queen female, and only a pair of reproductive males for each community, the naked mole rat echoes the worker style society of termites. Up to 100 sterile rats can exist in each complex system of burrows. Although perhaps decreasing the sacrificing individual’s personal fitness (like the worker rats), identical or similar genes can be reproduced by other members of the same species.  If the other gene carrier has a greater chance of reproduction (number of offspring) than the individual could, then the individual will sacrifice its ability to reproduce to help the other individual produce offspring instead, as there is a better chance for the gene, and therefore characteristic, to survive (2). So, the worker rats are safe guarding their own genes, but allowing their siblings to produce the offspring. This is still an example of Darwin’s natural selection, although his theory has been adapted to apply to the gene, not the individual host. This means that mammals endanger themselves in order to protect not only their relatives, but also to non-relatives carrying the same genes.

By explaining that natural selection is not only to pursue the favoured genes of an individual, but for favoured genes in general, the idea of species living in solitary environments seems impractical. Individuals behave to increase their inclusive fitness, regardless of personal fitness, for which social living can be useful. Social living can safeguard the gene pool and enhances a species’ overall fitness, as well as provide  more outlets for a gene to be reproduced (3)

The history of social organisation can tell us how it can function. To use the example of bees is good, as although bees are clearly not mammals, they provide a clear case of how societies can develop.  When the social systems of bees are compared, it can be found that most species are solitary, and that the honey bee is exceptional in that it forms highly complicated states in which thousands of individuals cooperate. As this is the only example of such a system, it can be concluded that bees were originally solitary. N. Tinbergen, in his book ‘Social Behaviour in Animals’, suggests that parent-offspring groups develop into symbiotic relationships between families, before later developing into full scale communities. (4) This further concretes the concept of gene protection and inclusive fitness mentioned previously. This concept can be taken further, as is the case with ants and termites. Evolution has continued, in the manner of extreme altruism whereby different worker and soldier ants are produced, rendering certain types sterile, as mentioned previously.

To discuss mammals and social living is to discuss humans. Humans, as we all know, are very different from the rest of the animal kingdom. When we try to classify certain human traits or explain human behaviour, we often fail. At first it would seems as though human actions can be explained through these simple gene-led desires. An example of this could be reciprocal altruism. Reciprocal altruism is when an individual will make a sacrifice with the knowledge that it will later be reimbursed with a similar or greater favour (5). Almost all unselfish acts made by humans could be placed into this category. Deliberate or not, it could be argued that all human behaviour related to relationships is performed with the anticipation of the repercussions that may arise. Selfish acts are of course also in concordance to the evolutionary concept of personal fitness and natural selection. All acts fall into these two simple ideas, and therefore all human action can be explained. Humans also fit into hierarchy models, mother-child attachment and gender role models as well as many more. There is a lot of literature to reaffirm this belief, including Washburn & Devore's work on the social life of Baboons(6). 'The human behavioural repertoire is replete with social interactions that are adaptive and that undoubtedly reflect the outcome of evolutionary processes' (7).

Instead of assuming that genes are all powerful, all controlling lords of evolution, with a gene for every action, we should look a little deeper. It is a widespread belief that mankind is the pinnacle of evolution. Perhaps we have surpassed the stage in which there is a gene for aggression, a gene for territorial defence, a gene for mate selection and so on, and have reached the next stage in which cultural learning and behavioural flexibility have taken precedence. It is a good reason why we should try and treat separate species' behaviour individually, rather than wedge them into an existing model. The cultural aspect of human and animal life is unexplained in evolutionary models, as it does not directly relate to genes or natural selection. Although not necessarily true, it is interesting to think of exciting new steps in evolution relating to cultural and social behaviour. Perhaps our unique awareness and what we perceive as morals, is somehow nature attempting to stabilise the planet. Our ability to communicate and feel emotions separates us from other organisms, and our desire to commit deeds which we know as 'right' has prevented the loss of countless human and animal lives and has helped ecosystems and nature survive. Without such mechanisms in place, humans will have undoubtedly hindered the growth of humanity and destroyed much of the natural world. I am aware such a viewpoint is fairly ambitious, but maybe the concept manifests itself in smaller, less obvious ways. Advanced social living has become the pinnacle of evolution, and not only helps animals survive in its basic form, but in the case of humans can act as a safeguard against destruction.

1/ Charles Darwin, On The Origin of Species by means of natural selection

2/ Hamilton, The Evolution of Altruistic Behavior