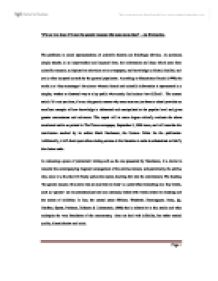 Genes: reasons why some men are just born to cheat.

'It's not you dear, it's me: the genetic reasons why some men cheat' - An Evaluation. The problems in social representations of scientific theories are blindingly obvious. As audiences simply absorb, in an impoverished and lessened form, the information and ideas which stem from scientific research, as depicted on television or in newspapers, real knowledge is diluted, distilled, and yet is often accepted as truth by the general population. According to Massimiano Bucchi (1998) the media is a 'dirty messenger' for science wherein factual and scientific information is represented in a simpler, weaker or distorted way to a lay public who merely find science 'too difficult'. The current article 'It's not you dear, it's me: the genetic reason why some men are just born to cheat' provides an excellent example of how knowledge is elaborated and manipulated at the popular level and given greater concreteness and relevance. This report will to some degree critically evaluate the above mentioned article as printed in The Times newspaper, September 2, 2008 issue, and will consider the conclusions reached by its author Mark Henderson, the Science Editor for the publication. Additionally, it will draw upon other existing sources in the literature in order to substantiate or falsify the claims made. In evaluating a piece of journalistic writing such as the one presented by Henderson, it is crucial to consider the accompanying linguistic arrangement of the articles content, and particularly, the articles title, since it is this that will firstly seduce the reader, drawing him into the commentary. The heading 'the genetic reasons why some men are just born to cheat' is a somewhat misleading one. Key words, such as 'genetic' are de-contextualised and are carelessly linked with words related to cheating and the notion of infidelity. In fact, the central study (Walum, Westberh, Henningsson, Reiss, Igl, Ganiban, Spotts, Pedersen, Eriksson & Lichtenstein, 2008) that is referred to in this article and what underpins the very foundation of the commentary, does not deal with infidelity, but rather marital quality, dissatisfaction and crisis. ...read more.

Furthermore, a correlation was found between AVPR1a receptor and human pair-bonding behaviours similarly to that reported in voles. It seems that Henderson's initially reporting, that men who inherit the genetic variant 334 are indeed less likely to be married, less likely to form long lasting bonds and experience marital problems was correct. Although these results are in line with previous observations, their reliability however might be drawn into question if one looks closely at the methods employed in the study. Participants were asked to self report on the state of affairs in their relationship via a questionnaire and so objectivity was virtually impossible. In order for more reliable results, measures of pair-bonding that are more objective than self report would be required, for example proneness to living alone versus cohabiting, marriage and divorce. Much remains unknown regarding the aetiology of human sexual infidelity. Such variability in results suggests that cultural and social factors can also exert a major influence on promiscuous behaviours in men. Although the Henderson article states that it would be 'impossible to predict whether any individual would be unfaithful or a bad partner on the basis of genes' alone, it does not however, consider the other possible contributory factors involved with infidelity. Gender alone, for instance appears to be strongly correlated with infidelity. Some authors assert that many more men compared with women engage if infidelity (Alien & Baucom, 2004), have significantly more sexual partners outside of the primary relationship (Spanier & Margolis, 1983; Wiggins & Lederer, 1984), have more permissive attitudes towards sex outside a relationship (Thomson, 1984; Lieberman, 1988) and possess a much stronger desire to engage in infidelity. Choi (1994) however found that men were only marginally more likely than women to engage in acts of infidelity and according to Oliver and Hyde (1993) men and women's rates of infidelity are becoming increasingly similar. Perhaps more importantly, gender also appears to be related to different types of infidelity and the meanings attached to the behaviour. ...read more.