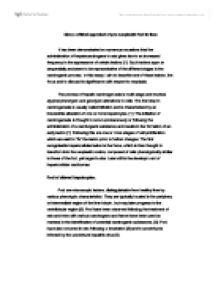 Give a critical appraisal of pre-neoplastic foci in liver.

Give a critical appraisal of pre-neoplastic foci in liver. It has been demonstrated on numerous occasions that the administration of hepatocarcinogens to rats gives rise to an increased frequency in the appearance of certain lesions [1]. Such lesions appear sequentially and seem to be representative of the different stages in the carcinogenic process. In this essay I aim to describe one of these lesions, the focus and to discuss its significance with respect to neoplasia. The process of hepatic carcinogenesis is multi-stage and involves atypical phenotypic and genotypic alterations to cells. The first step in carcinogenesis is usually called initiation and is characterised by an irreversible alteration of one or more hepatocytes, [1]. The initiation of carcinogenesis is thought to occur spontaneously or following the administration of a carcinogenic substance and results in the formation of an early lesion [1]. Following this are one or more stages of cell proliferation which are said to "fix" the lesion prior to further changes. The first recognisable hepatocellular lesion is the focus, which is then thought to transform into the neoplastic nodule, composed of cells phenotypically similar to those of the foci, yet larger in size. Later still is the development of hepatocellular carcinomas. ...read more.

of basophilic cells arranged in irregular plates - mitotic figures frequent - cytoplasm basophilic and glycogen poor - abundance of free or membrane-bound ribosomes Tigroid Basophilic cell foci - cells contain large, abundant basophilic bodies on a clear or acidophilic background - often exhibit tigroid appearance - nuclei of cells small and dense or large and transparent - ?-glutamyl tranferase and GST-P absent - difficult to classify on histochemical basis - characteristic ultrastructure - ordered stacks of cisternae of rough ER with membrane-bound ribosomes - large eosinophilic bodies in the cytoplasm - alterations of the plasma membrane of cells (e.g. blebbing) Enzymatically hyperactive foci - not detectable following H+E staining - significance in heptocarcinogenesis unclear - Increased activities of various enzymes including glyceraldehyde 3-phosphate dehydrogenase, glucose-6-phosphatase and glycogen synthase Species differences. Foci of altered hepatocytes have been identified in a number of species such as rats, mice (including transgenic mice prone to developing hepatic tumours), hamsters and monkeys [1]. They have also been observed in humans, although their significance in human hepatocarcinogenesis has not been fully investigated [3]. Interestingly, there are a significant number of reports of patients suffering from Von Gierke's disease or inborn hepatic glycogenolysis type 1, of whom more than 90% develop hepatic tumours during adolescence [3]. ...read more.

distribution [6]. In addition the determination of foci may enable risk assessment at very low doses [3]. Conclusion. In conclusion, foci of altered hepatocytes can be easily identified by the use of various stains. It is now widely accepted that they preceed the development of hepatic tumours by weeks or months in many species including primates [3]. The phenotypes of foci are varied and often unstable and phenotypic instability is often associated with the reversion or progression of foci. Despite the compelling evidence that foci represent a pre-carcinogenic state, it is obvious that they are not definitively precursors to liver tumours. The lesions arise spontaneously in older, control rats and their incidence can also vary with the strain of the rat used and other factors for example diet. There is some evidence that the carcinogenic potential varies with the type of focus as basophilic and mixed cell foci in particular represent phenotypes that are closer to neoplasia than other foci. Finally, it is important to note that despite their use in predicting carcinogenesis, the absence of such lesions does not exclude carcinogenicity [3]. ...read more.