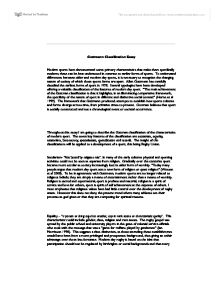 Guttmann Classification Essay Modern sports have demonstrated some primary characteristics that make them specifically modern; these can be best understood in contrast to earlier forms of sports. To understand differences between older and modern day sports, it is necessary to recognize the changing nature of society of which those sports forms are apart. Allen Guttmann has carefully classified the earliest forms of sport in 1978. Several typologies have been developed offering a valuable classification of the features of modern day sport. "The main achievement of the Guttman classification is that it highlights, in an illuminating comparative framework, the specificity of the nature of sport in different and distinctive social context" (Horne et al 1999). The framework that Guttmann produced, attempts to establish how sports cultures and forms diverge across time, from primitive times to present. Guttman believes that sport is socially constructed and not a chronological event or societal occurrence. Throughout this essay I am going to describe the Guttman classification of the characteristics of modern sport. The seven key features of the classification are secularism, equality, rationalism, bureaucracy, specialisation, quantification and records. ...read more.

Rationalism- "the practice of treating reason as the basis of belief and knowledge" The characteristic "Rationalism, is present in modern sports through complex rules and strategies" (Horne et al 1999) . In the games infancy there was a need to standardize the games first set of rules and strategies. These were set up at Rugby school in 1846. A need to control the rapidly spreading game saw the inaugural meeting at the Pall Mall Restaurant in 1871. Here the Rugby Football Union was founded. The sport's first governing body was so well organized and dominant that within ten years of its formation it has instituted as some of the games top strategies. More recently, in order to make the game more interesting and entertaining, points were increased from 3 to 5 to give the players further incentive to score tries. Bureaucracy- "a state of organization". Guttman states "modern sports are controlled through the establishment of complex organisations at international, national and regional levels" (Horne et al 1999). Since 1871 the RFU has been working for the game of rugby. ...read more.

Records- "the best performance in sport and most remarkable event of its kind". Guttman would imply modern sports involve an emphasis on setting and breaking records. Performances are compared between events, so that there are published records for teams within organisations, leagues and committees. Most importantly are world records. Individual sports need to achieve records as it is valid towards the end result. A sprinter needs to get world record timings in order to be a winner and known as a successful athlete. Team sports do not rely on measurements or timings; instead they use statistics, which suggests less need to strive records. Rugby union records can be found in the Guinness Book of Records for example, most world cup wins, highest transfer fees, biggest crowd etc. Modern sports are different from sports in other epoch. In no other time of period did sport exhibit these seven qualities. In summary, sport is not as old as the human race. The structure function and meaning of modern sport is radically different from the activities, games and sports of earlier time periods. The structure and function not only differs throughout history but also varies across contemporary societies. ...read more.