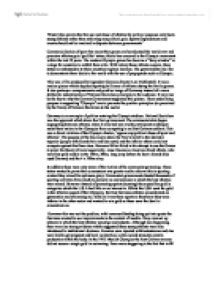 History has proven that the use and abuse of athletes for political purposes only hurts young athletes rather than achieving any political gain.

'History has proven that the use and abuse of athletes for political purposes only hurts young athletes rather than achieving any political gain. Sports Organisations and events should not be involved in disputes between governments' Commercialisation of sport has meant that games are broadcasted the world over and premiere athletes gain 'god like' status, this to has occurred in the Olympic movement within the last 20 years. The modern Olympic games has become a "shop window" or a stage for countries to exhibit there elite. With victory these athletes acquire, there status as ambassadors to there countries regimes increase. The governments also like to demonstrate there ideals to the world with the use of propaganda such as Olympia. This was a film produced by legendary German director Leni Riefenstahl. It was a motion picture which depicted sporting brilliance of athletes during the Berlin games. It also portrays a compassionate and positive image of Germany instead of a more deliberate indoctrination of National Socialism principles to the audience. It may also be the key to why the German Government supported this picture. ...read more.

The East German women won all but two gold medals on offer and they won them easily. It is not fair just to claim the Germans defied Olympic law's but other countries were found o have the same or similar institutions and have tried to show success by diversifying in to different aspects of the Olympics such as the Cuban's with there boxers and the Chinese with there elite badminton and table tennis stars. The ping pong diplomacy was used to bring to nations together using sport as there medium. The USA and China had lost relations since 1949, when china became a communist state. The USA was reluctant to continue its affairs with china since it's strongly believed in capitalism. In 1958 an unusual decision by the Peoples Republic of China, they withdrew from the Olympic Movement and it wasn't until 1971 that the IOC reinstated them. This was also the same year in which china invited the USA's table tennis team to play in a tournament. It was recalled by some as 'the ping heard around the world'. After the tournament had been played the relations were again established. ...read more.

It also promote more coloured athletes to try as they now have a equal chance for selection, this will hopefully improve the standards and level of competition. However, the defiant ways of the Germans have given them a label as 'cheats' and caused serious illness in athletes. It is estimated nearly 10% (10000) doped athletes face serious illness. This reputation could hinder the process of gaining future stars as they do not stand for there previous government did. Overall I feel that the statement I not fully justified as political influences have to be taken into account when staging a world games. Politics brings about positives such as the ping pong diplomacy brought new competitors and strengthened the sport. It also gave black athletes in South Africa the opportunity to compete. However it has also discouraged many potential athlete such as those in Germany by it Olympic committee's previous actions. I feel there need to be a balance between politics and sports, I feel if this is achieved then it will increase the number of young athletes rather then decrease. Therefore I do not fully agree nor disagree with the statement but feel that there needs to be an equilibrium. ...read more.