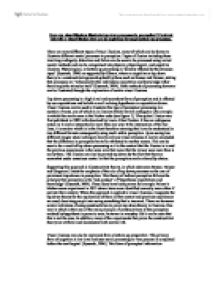 How can visual illusions illustrate top down processes in perception? Contrast this with a visual illusion that can be explained through bottom up processes. There are many different types of visual illusions, many of which can be shown to illustrate different mental processes in perception. Types of illusion including those involving ambiguity, distortion and fiction can be seen to be processed using varied mental methods and can be categorised into physical, physiological, and cognitive illusions. Physiological, or bottom up processing is 'directly affected by the stimulus input' (Eysenck, 2004) as supported by Gibson, where as cognitive or top down theory is a constructivist approach upheld by those such as Bruner and Neisser, stating that processes are 'influenced by the individuals expectation and knowledge rather than simply the stimulus itself' (Eysenck, 2004). Both methods of processing however can be illustrated through the explanation of certain visual illusions. Top down processing is a high level and secondary form of perception and is affected by our expectations and beliefs as well as being hypothesis or expectation driven. ...read more.

When this approach is applied to visual illusions, it supports the top down theory for the explanation of them in that context and previous experiences are used, deceiving people into seeing something that is incorrect. There are however several criticisms of using constructivism to prove top down theory in illusions. One way in which is that one of the main principle of constructivism is that perception reached by hypothesis is prone to error, however in everyday life it can be seen that this is not the case. In addition, many of the experiments that prove the constructivist theory are artificial and inconsistent with normal life. Visual illusions can also be explained from a bottom up perspective. This primary form of cognition is low level and uses serial processing as 'one process is completed before the next begins' (Eysenck, 2004). This form of perceptual information processing is frequently 'data driven' and is predominantly involuntary, not being influenced by context or hypothesis. Visual illusions can be used to explain this type of perceptual processing in a number of ways, one of which is in illusions which involve fiction. ...read more.

However there are several criticisms of Gibson's direct theory of perception, one of which being that processes are more complex than stated in his experiments, and another that his principles apply much more to some aspects of perception than to others. He also was incorrect in disregarding the use of 'internal representations to understand perception' (Eysenck, 2004) for example memory which was later proved erroneous by the work of Menzel. Although as shown, visual illusions can be explained using a bottom up or top down approach, many visual illusions cannot be clearly or fully categorized into either group. Often, visual illusions can be seen to have elements of both as perceptual processes and an example of this is the M�ller-Lyer Lines illusion (see figure 3). Eysenck, M.W. (2004). Principles of Cognitive Psychology. Hove: Psychology Press http://plato.stanford.edu/entries/relativism/supplement1.html Einh�user, Wolfgang, Martin, Kevan A. C. & K�nig, Peter (2004) Are switches in perception of the Necker cube related to eye position?. European Journal of Neuroscience 20 (10), 2811-2818. Lotto RB, Williams SM, Purves D (1999). "Mach bands as empirically derived associations". Proceedings of the National Academy of Sciences 96 (9): 5245-50 Gibson, J. J. (1979). The Ecological Approach to Visual Perception. Westport: Greenwood Press ...read more.