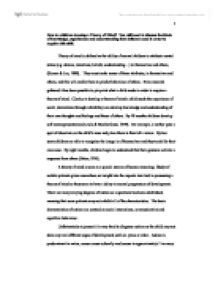 How do children develop a Theory of Mind? You will need to discuss the kinds of knowledge, experiences and understanding that children need in order to acquire this skill.

How do children develop a Theory of Mind? You will need to discuss the kinds of knowledge, experiences and understanding that children need in order to acquire this skill. Theory of mind is defined as the ability of normal children to attribute mental states (e.g. desires, intentions, beliefs, understanding...) to themselves and others, (Homer & Lee, 1999). They must make sense of these attributes, in themselves and others, and this will enable them to predict behaviour of others. From research gathered it has been possible to pin point what a child needs in order to acquire a theory of mind. Clearly, to develop a theory of mind a child needs the experience of social interactions through which they can develop knowledge and understanding of their own thoughts and feelings and those of others. By 18 months children develop self-metarepresentation (Lewis & Brooks-Gunn, 1979). For example, a mother puts a spot of chocolate on the child's nose and place them in front of a mirror. By two years children are able to recognise the image is of themselves and they reach for their own nose. ...read more.

However these figures were based on parental reports and so are not completely reliable from a psychological perspective. When Baron-Cohen (1996) asked children to draw impossible objects, autistic children were reluctant to cooperate. In everyday play 'normal' children use objects by manipulation to be symbolic in their imaginative activity. However with autistic children, they prefer to play alone and display repetitive play with the object with a low frequency of pretend play (Baron-Cohen, 1987). This difference in play experience has implications for the development for a theory of mind. Through the imaginative play of children, it has been found that they express emotion which is linked to the theory of mind. Emotions are intertwined into social relations (Woodhead, Barnes, Miell & Oates, 1995) yet before the development of emotional understanding; the child must be able to empathise (Reber, 1995). 'Normal' infants are able to recognise facial expression of others by three months old and by two years they use emotional terms in their language. By five years old they are able to understand that there may be individual differences in responses to a single situation (Gnepp et al., 1987). ...read more.

If the chimp pointed to the right container in front of the second trainer then he would not receive the food but would if the chimp got the wrong container. It was found that the chimp would deceive the second trainer by wrongly pointing to the incorrect container without the food. This shows how the chimps have the ability to deceive others. Yet again, this could be due to operant conditioning or to the chimps having some social learning ability, but there is not the evidence to say they have a theory of mind to the extent of humans. In society there are certain unwritten rules which are expected from each individual; those aspects we are obtain by having a theory of mind. Those who do not fit in with these rules i.e. autistic people can be classed as abnormal and different. A theory of mind has been found in both humans and animals, but impaired in autistic children. Future work should help to spread awareness about autism and for others to accept autism into their society. More research into autism needs to be done which will help to find the underlying cause and to use this information to discover other social disorders which mean that the individual is unable to develop a 'normal' theory of mind. ...read more.