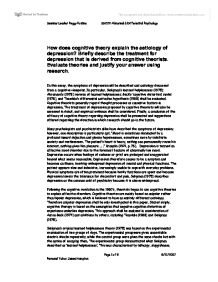 How does cognitive theory explain the aetiology of depression? Briefly describe the treatment for depression that is derived from cognitive theorists. Evaluate theories and justify your answer using research.

How does cognitive theory explain the aetiology of depression? Briefly describe the treatment for depression that is derived from cognitive theorists. Evaluate theories and justify your answer using research. In this essay, the symptoms of depression will be described and aetiology discussed from a cognitive viewpoint. In particular, Seligman's learned helplessness (1975); Abramson's (1978) revision of learned helplessness; Beck's 'cognitive distortion' model (1976), and Teasdale's differential activation hypothesis (1988) shall be evaluated. Cognitive theorists generally regard thought processes as causative factors in depression. The treatment of depression proposed by cognitive theorists will also be assessed in detail, and empirical evidence shall be considered. Finally, a conclusion of the efficacy of cognitive theory regarding depression shall be presented and suggestions offered regarding the direction in which research should go in the future. Many psychologists and psychiatrists alike have described the symptoms of depression; however, one description is particularly apt. "Mood is sometimes dominated by a profound inward dejection and gloomy hopelessness, sometimes more by indefinite anxiety and restlessness. The patient's heart is heavy, nothing can permanently rouse his interest, nothing gives him pleasure . . ." Kraeplin (1921, p. 76). Depression is termed an affective mood disorder due to the foremost feature of abnormally low mood. ...read more.

only activated or influenced by similar events to the ones that defined them. These schemas contain prepositional information (e.g. 'I am worthless'). When focused on three interlocking beliefs in a negative way (the cognitive triad), this causes and maintains depression. The cognitive triad causes negative, automatic thoughts (i.e. depressive thoughts occurring beyond the conscious control of the sufferer) and to systematic or logical errors. Systematic errors are a variety of errors of reasoning a depressive shows, which serve to perpetuate their depression. Examples include: over-generalisation, which is arbitrarily drawing a conclusion about a wide variety of things on the basis of single events (e.g. 'I failed my exam so I will fail in everything I do'). Arbitrary inference is the drawing of a negative conclusion in the absence of supporting information (e.g. 'my friend did not want to meet me therefore she hates me). Dichotomous thinking describes thinking in polar opposites. So something is either all good or a total disaster, (e.g. if I fail this year at university I might as well be dead'). Effectively, Beck defines the maintenance of depression as an interaction between all these factors causing a vicious cycle. See Figure 1. ...read more.

Learned Helplessness; Beck's Cognitive distortion model and Teasdale's Differential activation hypothesis. However, there are certain criticisms that apply to these models in general: the experimental samples used were mainly college students; the models are so general that they can apply equally well to anorexics, alcoholics etc and are therefore not very specific to depression. Most of the terms used are vaguely defined, leaving many processes and organisations unexplained. However, cognitive theories of depression generally suggest that mistaken beliefs and maladaptive information processing play a role in the onset and maintenance of depression (Beck, 1976). On the other hand, cognitive therapies based on Beck's (1976) model are usually the therapy of choice by practitioners, especially in cases of mild to moderate depression. Therefore although cognitive theory may not be adequate to explain the aetiology of depression it is sufficient as a treatment for depression. Looking to the future, new theories need to take a broader view and begin to model the interaction between biological, environmental, and physiological factors. Although the cognitive idea of aetiology of depression is hazy, the treatment they suggest for the disorder clearly works yet more work needs to be done before cognitive therapy can be regarded as a preventative of depression and supported empirically. ?? ?? ?? ?? Seminar Leader: Peggy Postma SS2.22 Abnormal & Differential Psychology Rachel MacDonald Page 1 of 5 5/17/2007 Personal Tutor: James Hampton ...read more.