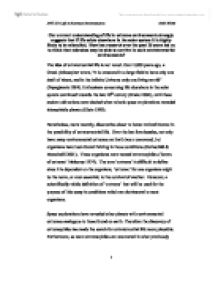 How had research over the past 25 years led us to think that microbes may be able to survive in extraterrestrial environments?

Our current understanding of life in extreme environments strongly suggests that if life exists elsewhere in the solar system it is highly likely to be microbial.  How has research over the past 25 years led us to think that microbes may be able to survive in such extraterrestrial environments?

The idea of extraterrestrial life is not novel. Over 2,000 years ago, a Greek philosopher wrote, "It is unnatural in a large field to have only one shaft of wheat, and in the infinite Universe only one living world" (Papagiannis 1984). Enthusiasm concerning life elsewhere in the solar system continued towards the late 20th century (Brake 2006), until these ancient old notions were dashed when robotic space explorations revealed inhospitable planets (Klein 1999).

Nonetheless, more recently, discoveries closer to home revived interest in the possibility of extraterrestrial life.  Over the last few decades, not only have many environmental extremes on Earth been uncovered, but organisms have been found thriving in these conditions(Rothschild & Mancinelli 2001).  These organisms were named extremophiles (‘lovers of extreme’ Malceroy 1974).  The term ‘extreme’ is difficult to define since it is dependent on the organism; ‘extreme’ for one organism might be the norm, or even essential, to the survival of another.  However, a scientifically viable definition of ‘extreme’ that will be used for the purpose of this essay is conditions which are detrimental to most organisms.

Space explorations have revealed other planets with environmental extremes analogous to those found on earth. Therefore the discovery of extremophiles has made the search for extraterrestrial life more plausible. Furthermore, as more extremophiles are uncovered in what previously were thought to be uninhabitable environments, our view of the conditions required for life becomes less restricted.

Extremophiles are found in all domains of life; from radiation-resistant bacteria (Anderson et al 1956) to extreme sunflowers thriving in salt marshes (Rieseberg et al 2003).  However, research over the past 25 years has shown that microbes are the most abundant group of extremophiles (Satyanarayana et al 2005). It is therefore logical to assume that if extraterrestrial life exists, it is highly likely to be microbial.  This essay examines the study of microbial extremophiles and its implication for life elsewhere in the solar system, using examples [see Table 1].

Thermophiles are extremophiles adapted for life in intensely hot environments, approximately in excess of 40°C, such as hot springs and deep-water hydrothermal vents (Brock 1986).  Temperatures at these locations would prove fatal to most organisms because biomolecules, including enzymes and nucleic acids, begin to deteriorate at high heat (Somero 1995).  Furthermore, high temperatures fatally increase the fluidity of membranes.    However, research over the past 25 years has shown that thermophiles have evolved adaptations in order to thrive in extreme hot environments where most organisms would perish.

Thermophile membranes largely contain saturated lipids which increase integrity, making it more resistant to heat (McElhaney 1976).  Furthermore, thermophile DNA is stable at high temperatures due to high salt concentrations (Marguet & Forterre 1998).  In addition their DNA has gyrases (loops) that form super coils.  Consequently, thermophile DNA is tightly coiled, preventing it from damage in high temperatures (Forterre et al 1995).  Also, thermophiles have heat-resistant enzymes (Adams et al 1995).  These enzymes are able to retain their structure in high temperatures, and therefore remain operational in conditions where other enzymes would denature.  For example, a unique variant of DNA polymerase enzyme is essential for the survival of the bacterium Thermus aquaticus, discovered in hot springs at Yellowstone National Park (Brock & Freeze 1969). DNA polymerase is commonly used by organisms to assist DNA replication, and conventionally denatures at high heat.  In contrast, the variant used by T.aquaticus, named Taq polymerase, functions optimally at 75-80°C. Taq polymerase was isolated from T.aquaticus and is now one of the most significant enzymes in molecular biology.  It is an essential part of the polymerase chain reaction (PCR) technique used to amplify DNA sequences (Saiki 1988).

At high temperatures, chlorophyll is degraded and therefore photosynthetic organisms cannot exist (Rothschild & Mancinelli 2001).  Consequently, another problem facing thermophiles is finding an alternative source of nutrition.  For example, Pyrolobus fumarii is a microbe that grows on the walls of deep-sea hydrothermal vents and can propagate in temperatures up to 113°C(Blöchl et al 1997). (P.fumarii was previously the most extreme thermophile known until the discovery of ‘Strain 121’(Kashefi & Lovley 2003), which increased the upper temperature limit for life to 121°C). P.fumarii is a chemoautotroph and synthesises its own food from surrounding chemicals, such as hydrogen.

The existence of thermophiles has significant implications for the possibility of life elsewhere in the solar system.  It expands the prospect that life can exist in extremely hot extraterrestrial environments, such as those predicted on Jupiter’s moon, Io.  This satellite is heated by tidal activities from Jupiter and possesses numerous active volcanoes on its surface (Lopes et al 2004).  Also, findings of chemoautotrophs have dashed the ideas that energy from the Sun is a requirement for life.  It is now known that communities, such as those found at deep-sea hydrothermal vents, can thrive by exclusively using inorganic compounds as energy sources (Lutz & Kennish 1993). This opens the mind to the possibility that life may exist in the sub-surface of planets elsewhere in the solar system (Schulze-Makuch & Irwin 2001, Pirajno & Van Kranendonk 2005).

Psychrophiles are organisms that exist in extreme cold environments.  These extremophiles have an optimal growth at approximately 15°C or lower (Morita 1975).  Such temperatures are detrimental to most organisms because membranes lose integrity and enzyme activity decreases (Somero 1995).  Furthermore, the formation of ice crystals can cause severe structural cell damage.  However, research over the past 25 years has shown that psychrophiles are well-adapted to their cool environments.

Psychrophile membranes are made largely from unsaturated lipids which enhance membrane fluidity at low temperatures (Russell 1997).  Also, they have enzymes adapted to operate at near freezing temperatures (Gerday et al 2000).  For example Polaromonas vacuolata, found in Antarctic sea ice, optimally multiplies at temperatures of 4°C (Irgens et al 1996).  However, above 12°C it will cease to reproduce because its enzymes have adapted to function over a lower temperature range.  To prevent ice crystal damage, some psychrophiles produce cyroprotectants (such as glycerol), which effectively lower a cell’s freezing point, allowing it to maintain flexibility in low temperatures (Krembs et al 2002).

Contrary to thermophiles, photosynthetic psychrophiles, such as Chlamydomonas nivalis (also known as ‘red snow’ due to the colouration it creates), are able to photosynthesise at near to freezing temperatures (Williams et al 2003).  This provides extremophile communities with a possible energy source in extremely cold environments.

Recently there have been discoveries of lakes (kept liquid by pressure) under the ice sheet of Antartica, and it is speculated that extremophiles may exist in these hidden waters (Gavaghan 2002).  This would have significant implications for extraterrestrial life since conditions predicted for these lakes may be similar to those believed to be present underneath the ice crust of Europa, another of Jupiter’s moons (Kargel et al 2000).  Using these Earth lakes, life detection techniques could be refined before venturing into the solar system, hence increasing the success of extraterrestrial life searches.

Halophiles are extremophiles that thrive in salty environments, such as salt lakes, salterns and the Dead Sea.  At these locations organisms become very dehydrated as they lose water through their cell walls by osmosis (Rothschild & Mancinelli 2001). However, research over the past 25 years has revealed how halophiles avoid this fate.  Halophilic algae, such as Dunaliella salina, and bacteria balance the external osmotic pressure by producing compatible solutes such as glycerol (Galinski 1993).  Halobacterium (Archaea) achieve the same effect using a molecular pump to exclude sodium ions from the cell, whilst accumulating potassium ions within the cell (Speelmans et al 1995).

Discoveries of halophiles are important in the search for life elsewhere, particularly concerning the Meridiani Planum plains of Mars.  After discoveries of evaporates containing high sodium chloride concentrations, these plains are a hypothesised previous salt lake, perhaps once home to halophiles (Litchfield 1998).

Piezophiles are organisms that thrive under great pressure.  Pressure is problematic to life as it compresses biomolecules to fatal levels (Mozhaev et al 1996).  However, research over the last 25 years has discovered that piezophiles are adapted to tolerate these effects.  For example, piezophile membranes are largely made from unsaturated lipids which help circumvent problems caused by high pressure (Yano et al 1998).  Also a study by Sharma et al (2002) showed that even bacteria not adapted to high-pressure, such as Escherichia coli, can tolerate pressures equivalent to those experienced at 160km under water.

Piezophiles (and pressure tolerant bacteria) are important in the search for extraterrestrial life as it allows for the possibility of organisms thriving in high-pressure conditions elsewhere in the solar system such as the sub-surface of planets.  Therefore, although space missions have detected no life on the surface of planets (Klein 1999), there is a possibility for the existence of sub-surface organisms.

To conclude, until relatively recently there has been limited knowledge regarding Earth’s extreme environments.  As our exploration continues we realise our view as to what forms of life might take is constrained.  Nevertheless, before venturing out into the unknown to discover extraterrestrial life, it would perhaps be wise to continue studying these exotic areas closer to home.  Extremophiles provide us with a template for life on other planets, and encourage us to broaden our perspective of where life may exist.   With an expanded idea of the necessities for life, coupled with further study of extremophiles, improvements in exploration and analytical technology can be made; effectively arming ourselves with the tools required for a successful extraterrestrial life search.  By opening our minds to novel possibilities and refining our expertise, we may soon find life elsewhere in the solar system, as predicted long ago by our ancient predecessors.

Brake, M. (2006) On the plurality of inhabited worlds: a brief history of extraterrestrialism. International Journal of Astrobiology, 5, 99-107.

Forterre, P., Confalonieri, F., Charbonnier, F. & Duguet, M. (1995). Speculations on the origin of life and thermophily - review of available information on reverse gyrase suggests that hyperthermophilic prokaryotes are not so primitive. Origins of Life and Evolution of the Biosphere25, 235-249.

Litchfield, C. D. (1998) Surrvival Strategies for Microorganisms:Hypersaline Environments and Their Relevance to Life on Early Mars. Meteoritics and Planetary Science, 33, 813-819.