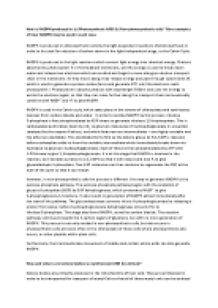 How is NADPH produced in (a) Photosynthetic AND (b) Non-photosynthetic cells? How and where are ketone bodies (a) synthesised AND (b) utilised?

﻿How is NADPH produced in (a) Photosynthetic AND (b) Non-photosynthetic cells? Give examples of how NADPH may be used in each case. NADPH is produced in photosynthetic cells by the light-dependent reactions of photosynthesis in order to be used for reduction of carbon atoms in the light-independent stage, or the Calvin Cycle. NADPH is produced in the light reactions which convert light energy into chemical energy. Photons absorbed by photosystem II in the thylakoid membrane, and the energy is used to break down water and release two electrons which are excited and begin to move along an electron transport chain in the membrane. As they move along, they release energy and pass through cytochrome bf, which is used to generate a proton-motive force and generate ATP until the electrons reach photosystem I. Photosystem I absorbs photons with wavelength 700nm and uses the energy to excite the electrons again, so that they can move further along the transport chain and eventually combine with NADP+ and H+ to give NADPH. ...read more.

The reaction pathway continues towards the 3-carbon sugars of glycolysis, but with no more generation of NADPH. This process is not only needed in non-photosynthetic cells, but also occurs in photosynthetic cells and even often in the chloroplasts of these cells where photosynthesis also occurs, or other plastids within plant cells. Furthermore, the transmembrane movement of malate and certain amino acids can also generate NADPH. How and where are ketone bodies (a) synthesised AND (b) utilised? Ketone bodies are primarily produced in the mitochondria of liver cells. They are synthesised in order to be transported for transport of acetyl-CoA so that all of these acetyl units can be oxidised ? for example, during starvation, gluconeogenesis depletes the supply of oxaloacetate which means that it cannot be used to combine with acetyl-CoA. Therefore, acetyl-CoA resulting from fatty acid breakdown must be oxidised in another way, in this case by conversion to ketone bodies. The ketone bodies are acetone, D-3-hydroxybutyrate and acetoacetate, and these are three water-soluble molecules which can pass through the blood-brain barrier (which acetyl-CoA cannot) ...read more.

This is generally not true in the brain, however, and so ketone bodies are only required in the brain in great concentrations when the body is glucose-deficient i.e. during times of starvation, but also as the primary source of energy in the renal cortex. It is in these cells that ketone bodies are converted to acetyl-CoA so that this can enter the TCA cycle. This conversion occurs when acetoacetate receives a CoA group from succinyl-CoA via catalysis by CoA transferase to give acetoacyl-CoA. This is then cleaved by thiolase to yield two molecules of acetyl-CoA, as this is the molecule needed for entry into the TCA cycle in order to generate NADH and FADH for use in oxidative phosphorylation to generate ATP. When the demand for acetyl-CoA becomes high in these cells, ketone bodies are transported to them instead of acetyl-CoA because the CoA transferase enzyme is not present in liver mitochondria so this must occur in the energy-requiring cell. Therefore, the ketone bodies act as a water-soluble, transportable form of acetyl units. ...read more.