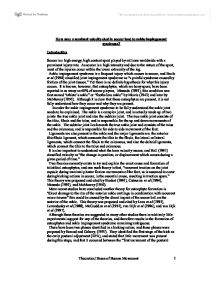 How may a maximal velocity shot in soccer lead to ankle impingement syndrome?

How may a maximal velocity shot in soccer lead to ankle impingement syndrome? Introduction Soccer is a high energy, high contact sport played by millions worldwide with a prominent injury rate. As soccer is a high intensity and due to the nature of the sport, most of the injuries occur within the lower extremity of the leg. Ankle impingement syndrome is a frequent injury which occurs in soccer, and Barile et al (1998) classified joint impingement syndrome as "a painful syndrome caused by friction of the joint tissues." Yet there is no definite hypothesis for why this injury occurs. It is known, however, that osteophytes, which are bony spurs, have been reported in as many as 60% of soccer players, Massada (1991), this condition was first named "athlete's ankle" or "footballers ankle" by Morris (1943) and later by McMurray (1950). Although it is clear that these osteophytes are present, it is not fully understood how they occur and why they are present. In order for ankle impingement syndrome to be fully understood the ankle joint needs to be explained. The ankle is a complex joint, and is actually made up of two joints: the true ankle joint and also the subtalar joint. The true ankle joint consists of the tibia, fibula and the talus, and is responsible for the up and down movements of the ankle. The subtalar joint lies beneath the true ankle joint and consists of the talus and the calcaneus, and is responsible for side to side movement of the foot. Ligaments are also present in the ankle and the major ligaments are: the anterior tibiofibula ligament, which connects the tibia to the fibula, the lateral collateral ligaments, which connect the fibula to the calcaneus, and also the deltoid ligaments, which connect the tibia to the talus and calcaneus. It is also important to understand what the term velocity means, and Hall (1991) classified velocity as "the change in position, or displacement which occurs during a given period of time." ...read more.

The footwear the subject wore could also be a limitation as it was not soccer specific footwear, and therefore could have restricted the ankle plantarflexion of the subject. Conversely the footwear could have allowed more ankle plantarflexion than soccer specific footwear. To combat this, the subject should have worn soccer specific footwear in order to replicate a maximal velocity kick on a soccer pitch in the correct kit. An additional limitation is that only 1 subject was used in the study and therefore the results are not representational to the population as a whole. To prevent against this, more subjects should have been used, such as the numbers used by Tol et al (2002) who used 15 subjects, yet more could be used for greater ecological validity. Along with this recommendation is the fact that more kicks should be analysed to give a greater overall view of the kicking action to be examined, and also to achieve a more reliable average. The overall conclusion of the study conducted is that hyper-plantarflexion does occur when a maximal velocity kick contacts with a soccer ball, and this is verified in Figures 4 and 5. These results support the hypothesis proposed and cited by Biedert (1991), Cutsuries et al (1994), Massada (1991), and McMurray (1950), who specified that , "recurrent traction on the joint capsule during maximal plantar flexion movements of the foot, as is assumed to occur during kicking actions in soccer, is the essential cause, resulting in traction spurs." Although kick 1 did not achieve hyper-plantarflexion it does follow both Figure 4 and 5 in terms of the trends up to and after hyper-plantarflexion. A further conclusion of the study is that more research needs to be carried out into the theory proposed and cited by Lees et al (1991), Levendusky et al (1988), McCrudden et al (1991), van Dijk et al (1996), and van Dijk et al (1997), as this study was unable to categorically state whether the theory was correct due to the location of the ball on the anterior ankle being recorded. ...read more.