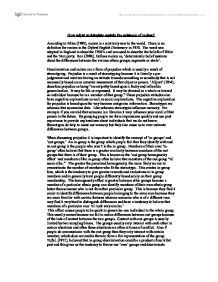 How might sociologists explain the existence of racism? According to Miles (1993), racism is a relatively new to the world. There is no definition for racism in the Oxford English Dictionary in 1910. The word was adopted in England in about the 1930's and was used to describe the beliefs of Hitler and the Nazi party. Rex (1986), Defines racism as, 'deterministic belief systems about the differences between the various ethnic groups, segments or strata'. Discrimination and racism are a form of prejudice which is usually a result of stereotyping. Prejudice is a result of stereotyping because it is literally a per-judgement and involves having an attitude towards something or somebody that is not necessarily based on an accurate assessment of that object or person. 'Allport' (1954), describes prejudice as being "an antipathy based upon a faulty and inflexible generalisation. It may be felt or expressed. It may be directed as a whole or toward an individual because he is a member of that group." These prejudice attitudes also have cognitive explanations as well as social explanations. The cognitive explanation for prejudice is based upon the way humans categorise information. Stereotypes are schemas that summarise data. Like schemas stereotypes influence memory. For example if you are told that someone is a librarian it may influence your recall of that person in the future. By grouping people we form impressions quickly and use past experience to provide explanations about individuals that we do not know. ...read more.

This can cause frustration which leads to aggression. There are many examples of violence which has been caused by racism e.g. Bradford race riots (2002). The 'Scapegoat Theory of Prejudice' occurs when people can't aggress against the source of their frustration and so they aggress towards weaker or stigmatized groups. According to Dollard et al. (1939), this type of prejudice occurs because, frustration always gives rise to aggression and aggression is always caused by frustration. Taking a 'Freudian' view, Dollard et al. claimed that we need to vent our frustration but when we are unable to do this directly; we do it indirectly by displacing it on to a substitute target. Some people argue that stereotyping is a human nature which is necessary to categorise people. However there are certain factors that can help people to ignore stereotypes. Once personal information is known about an ethnic group it causes stereotypes to loose there relevance and impact, it just depends on interaction. The perceiver can also use their cognitive ability to focus on a particular individual of a stereotyped group. Also the perceiver's motivation is a key factor in reducing stereotypes. People manage to set aside pre-existing beliefs is they are motivated to form an accurate impression. It is believed that people are more likely to form an impression based on stereotypes if they are busy, in a hurry or stressed because they do not make the effort required to think carefully about attributes. ...read more.

Geographically some areas are more racist than others this can be a result of conformity to societal group norms. 'Pettigrew, (1959)' found that traditionally discrimination against blacks is greater in southern USA. Minard (1952) found that black and white coal miners in West Virginia followed a pattern of almost complete integration bellow the ground, but almost complete segregation when above. This makes sense only when viewed in terms of conformity to the norms which operated in those different situations. If racial stereotypes are the 'societal norm' then people who are constantly subjected to them are likely to become unconsciously prejudice and may adopt stereotypes without awareness. This type of stereotype may be activated without thinking and without conscious intent. Studies of inter-group conflict appear to show that increased contact between social groups can reduce prejudice and increase attraction. This attraction appears to be due to many factors. Increased contact between groups can make the groups stops the members from making comparisons between the groups and enables hem to draw similarities between the groups. Incorrect and exaggerated stereotypes seem to be one of the main reasons for prejudice. Contact of different groups can lead to disconfirmation of group stereotypes by offering information which is inconsistent with existing stereotypes. Motivation is required to try and categorise members of groups as individuals rather than stereotypes of a certain group. Inequality creates hostility and so if contact between groups is increased then the groups should be of similar status. ...read more.