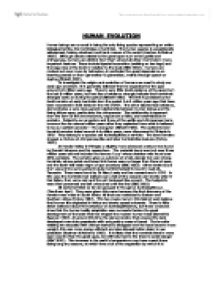 HUMAN EVOLUTION Human beings are unusual in being the only living species representing an entire biological family, the hominidae or hominids. The human species is exceptionally widespread, having colonised most land masses of the world (Harrison & Weiner 1982). Although closely related to the great apes such as the gorilla and chimpanzee, humans are distinct from them all and all other mammals in many important features. These include bipedal locomotion (walking on two legs) and the large size of the brain in relation to the body (BBC 2002). Humans are marked out even more by behaviour, in particular the great dependence on learning passed on from generation to generation, mainly through speech or signing (Birkett 1992). To investigate the origins and evolution of humans we need to study our early ape ancestors. It is generally believed that we separated for the apes around 6-8 million years ago. There is very little fossil evidence of the apes from the last 8 million years, but two lies of evidence strongly indicate that homininds diverged early on during the period (Birkett 1982). The first is provided by the fossil remains of early hominids from the period 3-4.5 million years ago that have been recovered in East Africa in the mid 1970's. The other biochemical evidence, demonstrates a very close genetic relationship between human beings and the living African apes, particularly the chimpanzee. ...read more.

found at the Olduvai Gorge in Tanzania (Harrison & Weiner 1987). In the same general period, stone tools began to appear, giving us the first direct archaeological evidence of behaviour. It cannot be proved that the stone tools are all linked with Homo. Species of Hominids such as Australopithecus boisei survived until about 1 million years ago. They may also have made tools, but as the archaeological record continues without a break after their extinction, the importance of Homo as a tool-maker has to be acknowledged. Stone tools clearly imparted a major advantage to the hominids leading a hard life on the savannah. They provided sharp edges allowing, the hominids to cut hides, meat and roots and probably to shape wood. It is not clear to what extent animals were hunted at this time it seems more likely that a lot of the food was scavenged (Harrison & Weiner 1987). By 1.8 million years ago a variety of homo rapidly achieved stature similar to that of modern human beings. Brain size increased to about 800 - 1000 cubic centimetres (modern human average 1500cc) known as homo erectus, found in Africa, Asia and Europe, indicating a spread of human occupation out of the tropics. How human their behaviour was is still debated, but it is clear they had the ability to adapt to the seasonal climate of the temperate zone (Carter 1983). ...read more.

These mutations can sometimes lead to desirable characteristics that enable the individual to survive more effectively than others of it's species. Mutations can also be used to determine how closely different species may be related. By examining the sequence of amino acid along certain protein chains and comparing them, it is possible to decide which species are closely or distantly related (Barrett & Spencer 1997). If the unit of selection is the individual then the nature of evolutionary change must of necessity be gradual. The characteristics of the population of a species will be modified as the generations succeed one another. This slow gradualism contrasts with the alternative view, which sees the species as a whole as the unit of selection i.e. the fittest species survive, while less well-adapted species become extinct. In this case change can be sudden (precipitated, for example, by climatic changes) and the evolutionary process would appear as a series of jumps. After much debate it is now widely accepted that evolutionary change is gradual, but at certain specified times the slow tempo of evolutionary change is punctuated by a fairly rapid speeding up. However this is still achieved by the normal process of selection of individuals (Darwin 1865) As has long been realised in our own species and indeed in our individual personalities, there is an ever-present mixture of both selfish and altruistic traits. It is this inner conflict that provides the driving force of evolution, and is the reason why we are who we are today. ...read more.