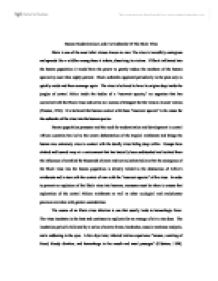 Human modernization leads to outbreaks of the Ebola virus.

Human Modernization Leads To Outbreaks Of The Ebola Virus Ebola is one of the most lethal viruses known to man. The virus is incredibly contagious and spreads like a wildfire among those it infects, dissolving its victims. If Ebola infiltrated into the human population it would have the power to greatly reduce the numbers of the human species by more than eighty percent. Ebola outbreaks appeared periodically in the past only to quickly reside and then reemerge again. The virus is believed to have its origins deep inside the jungles of central Africa inside the bodies of a "reservoir species," an organism that has coevolved with the Ebola virus and serves as a means of transport for the virus to its next victims (Preston, 1994). It is believed that human contact with these "reservoir species" is the cause for the outbreaks of the virus into the human species. Human population pressures and the need for modernization and development in central African countries has led to the severe deforestation of the tropical rainforests and brings the human race extremely close to contact with the deadly virus hiding deep within. Groups have slashed and burned away at a environment that has basically been undisturbed and isolated from the influences of mankind for thousands of years and now scientists believe that the emergence of the Ebola virus into the human population is directly related to the destruction of Africa's rainforests and in turn with the contact of man with the "reservoir species" of the virus. ...read more.

Although a virus can neither be considered alive nor dead, it is considered a "life form" and so can be analogous to a species. Ebola has been known to mutate into new strains with new characteristics and abilities such as the Ebola Reston strain (Preston, 1994). Ebola invading the human population in Reston could be analogous to one of an exotic "species". It would be an example of a "species" addition into an environment in which it was not previously found. When an exotic species is introduced into a new environment there are a number of possible outcomes, but in the case of Ebola the population interaction is one of exploitation. It's a symbiotic interaction where the virus is considered a parasite and benefits at the expense of the host. Had Ebola been able to leak out into the Reston community it could have entered the human species, mutated so that it could effect human cells, amplified itself, and spread rapidly through the population killing over eighty percent of those it infected. Species additions and their interactions with local organisms can upset the balance in the environment and have long lasting negative effects. By importing animals for studies, like the monkeys in the Reston incident, there is the possibility of introducing a foreign pathogen and altering the balance of environments that have not had exposure to the pathogen. By deforesting the African rainforests, humans are inadvertently introducing Ebola, an exotic "species," into the human environment which can have unexpected results. ...read more.

However, by creating synthetic antibodies are humans altering the course of evolution originally determined by the earth's environments? The human population might already be too large for the earth to sustain and so the earth might have created a virus such as Ebola to put an end to the human destruction of its environments and resources. Could the human race be the true virus? Are we the parasites that the earth is desperately trying to destroy? Today, scientists are still searching for a way to control the Ebola virus. They believe that with the discovery of the "reservoir species" new insights could be made into antibody and vaccine research (Kahn, 1996). However, if the rainforest had stayed undisturbed it is very possible that the human species would never had contact with Ebola and that the virus would have continued its life cycles deep within the rainforest as a natural part of the ecosystem. Evidence does show that outbreaks have occurred near factories and developmental areas near newly exposed areas of the rainforests. Alarmingly, Ebola outbreaks have occurred more frequently in the nineties than in the past. The enormous human population has created an imbalance in the environment and so the earth will respond. Humans, with their evolutionary weakened immune systems, would be the ideal hosts for the viruses that the environments of earth have created. Our actions as a species have a direct impact on the balance of nature and if we are not careful enough to keep the environmental balance that the earth took billions of years to establish, we could lead our species to its own demise. ...read more.