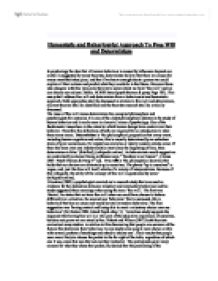 Humanistic and Bahaviourist Approach To Free Will and Determinism

Humanistic and Bahaviourist Approach To Free Will and Determinism In psychology the idea that all human behaviour is caused by influences beyond our control is suggested by many theorists, determinists believe that there are causes for every event that takes place, and that if we know enough about a person we could explain all their actions and predict what they would do in the future. However those who disagree with this view point believe to some extent we have 'free will' and we can choose our actions ( Baker, M 2003 Introd psych:themes & persp Page 101). This essay shall address free will and determinism from a behaviourist and humanistic approach. Both approaches shall be discussed in relation to free will and determinism, relevant theories shall be identified and the theorists research shall be critically discussed. The issue of free will versus determinism has occupied philosophers and psychologists for centuries. It is one of the oldest philosophical debates in the study of human behavior and it can be seen in almost all areas of psychology. One of the fundamental issues here is the extent to which human beings have control over their behavior. Therefore the definitions of both are required for an introduction to what these terms mean. ...read more.

A. Gross (1990) a theorist states that intuition suggests people have the ability to choose their own courses of action and determine their behaviour, which implies they have 'free will'. The positivistic nature of scientific psychology implies that behaviour is determined by external or internal events or stimuli, and people are passive responders of this ( Gross 2001: Psych Themes & Persp 4th ed). Taylor's (1963) theory suggests determinism is ''the affect that some cause or causes, or that everything is not only detriment but casually determined''. It's only humans who can agree and disagree to make decisions; this can only be done by using their minds (mental processes). This implies free will is linked with having a mind but this not necessarily since it is possible that decisions etc are themselves determined although they appear freely chosen (Gross 2001: Psych Themes & Persp: 4th ed). Humanistic psychologists Carl Rogers and Abraham Maslow believe in free will, they argued that people have choice in their behavior, and they denied that people's behavior is at the mercy of outside forces alone. Roger's client-centered therapy is based on the assumption that the client has free will to change if he or she chooses to do so. ...read more.

are the results of causal sequences stretching back into the past. The dispute then narrows to the issue of whether a solitary internal factor ( free will or self) is somehow immune from the influence of the past. This suggests that there is no real incompatibility between determinism and free will, determinists research suggested that in principle it is possible to show that an individual's actions are caused by a sequence of physical activities in the brains. If free will (e.g. conscious thinking and decision making) forms part of that sequence, it is possible to believe in free will and human responsibility at the same time as holding to a deterministic position. This would not be the case if free will is ``regarded as an intruder forcing its way into the sequence of physical activities in the `brain, but there are no good grounds for adopting this position. Therefore the controversy between free will and determinism may be viewed as artificial and of little concern to psychologists. It is clear that free will and determinism have been discussed from both a humanistic and behaviouristic view, and both approaches posed a significant amount of theoretical research to support their suggestions. However if further theries from different perspectives were included then free will and determinism could be discussed more throroughly with all research included from e.g. sociobiology, biological, social learning, psychoanalytical and cognitive theories. ...read more.