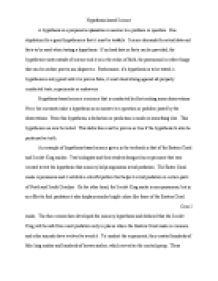 ﻿Hypothesis-based Science A hypothesis is a proposed explanation or answer to a problem or question. One stipulation for a good hypothesis is that it must be testable. Science demands for actual data and facts to be used when testing a hypothesis. If no hard data or facts can be provided, the hypothesis exists outside of science and it is in the realm of faith, the paranormal or other things that can be neither proven nor disproven. Furthermore, if a hypothesis is to be tested, a hypothesis is only good until it is proven false; it must stand strong against all properly conducted tests, experiments or endeavors. Hypothesis-based science is science that is conducted by first making some observations. Next, the scientists make a hypothesis as an answer to a question or problem posed by the observations. From this hypothesis, a deduction or prediction is made on something else. This hypothesis can now be tested. This deduction must be proven as true if the hypothesis to also be portrayed as truth. An example of hypothesis-based science given in the textbook is that of the Eastern Coral and Scarlet King snakes. ...read more.

Nevertheless, it was important to have a control group; in this case the brown snake was such, as it would?ve been impossible to determine whether the results gathered were not caused by another variable. In this case, the brown snakes were almost totally ignored in areas where the coral snake was absent; as the predators were seen to be drawn to the bright colors of the fake king snakes without any fear (Campbell et al, 2006). The experiment I chose was a great example of hypothesis-based science. First of all, a good hypothesis was made that was testable. The researchers were not limited to experiment in just these snakes, as there is a myriad of examples in biology that they could have used. Nevertheless, the way the researchers carried out the experiment demonstrated the efficiency of hypothesis-based science. The biologists and the student made the mimicry hypothesis and then proceeded to test this hypothesis with a controlled experiment. An experimental group was compared with a control group and the only factor that differed from both was skin coloration. This experiment lent credibility to their results and left skin coloration as the only factor that allowed for the king snakes higher survivability in areas where the coral snake is present. ...read more.

Hypothesis-based science study is unique in its approach to scientific knowledge. Unlike discovery science where scientists make observations and describe different things, in hypothesis-based science, an educated guess is made, which then must be tested to be proven as most likely true. As in the case of the coral and king snakes, the researchers were able to prove their prediction that mimicry can help an organism escape predation, but only in areas where the organism they are copying also exists. As technology progresses, it will allow scientists to build upon the knowledge they already have and come up with grander hypotheses regarding different phenomenon in our lives. These hypotheses will force them to attempt to disprove them and if Cruz 4 they are able to withstand these and other tests, it will add more to the knowledge of biology in the natural world. Cruz 5 Reference List Campbell, N.A., Reece, J.B., Taylor, M.R., and Simon, E.J. (2006). Biology: Concepts and Connections (5th ed.). San Francisco, CA: Benjamin Cummings. Printed in Biology Concepts and Connections, a Custom Edition for Rio Salado College. ...read more.