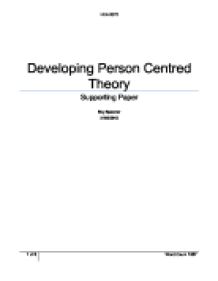 HEA 2072 Developing Person Centred Theory Supporting Paper Roy Spencer 31/03/2012 In order to compare and contrast both Focusing-Oriented and Experiential therapies to Classical Person-Centred theory it is important to look at each in turn to understand what they are. Classical Person-Centred therapy, or Classical Client-Centred therapy as it is often referred to, can be considered as that which adheres to the original tenets as written by Carl Rogers in his 1951, 1957 and 1959 works. I consider that there are three important features that need to be considered as part of these works. Firstly there is the accepting of the actualising tendency as the motivation of people to achieve, maintain and enhance their potential. The client is the expert on their life and what is best for them and not the therapist. Secondly is that there are no additional therapeutic techniques required beyond the six necessary and sufficient conditions of therapeutic change. By necessary Sanders (2006:9) states 'Rogers means that in order for therapeutic change to take place all of the conditions must be present'. ...read more.

He also respects the 'life forward' tendency which can be directly related to the 'classical' actualising tendency. Experiential therapies are therapeutic approaches that can be seen to originate from Gendlin and F-OC's 'felt sense'. They believe that through reflecting upon and symbolizing experiences people can form new meanings and thus change their lives. Experiential therapy is used to describe a myriad of differing approaches, and according to Baker (2008) not all of which can be philosophically considered to be person centred. One approach is that of David Rennie. In 1998 Rennie published Person-Centred Counselling: An experiential approach. As he developed his ideas through research he later described his approach as an 'experiential person-centered approach' (Rennie, 2006). Rennie aligns his approach closely to Gendlin in that his is a holistic form of experiential therapy. His approach can be defined by five features the first of which is client reflexivity. Baker (2008) describes this as being able to consider our feelings. He says 'we can express our feelings and, simultaneously, have feelings about how the expression of those feelings is being received' (Baker, 2008:47). ...read more.

As a person centred fractioned I find that this is a relatively small move away from my own way of being but it seems a giant leap from that of 'classical' theory of non directivity. The final feature of Rennie's experiential approach is metacommunication where 'the counsellor makes visible the belief that there is a fundamental equality between counsellor and client' (Baker, 2008:54). This idea again is a deeply person-centred view of the relationship but I find slightly contradictory to the 'experts' stance of process direction. In summary, both F-OC and Rennie's Experiential approach to therapy demonstrate their person-centred roots. That said they also clearly show their differences and the move away from 'classical' theory. It is obvious that both view the 'classical' six necessary and sufficient conditions as necessary but not sufficient with the introduction of 'techniques' beyond that of Rogers original tenets. They also both work in ways that cannot be considered non-directive with therapists of both approaches taking a lead and directing the sessions from time to time. Gendlin's F-OC has a belief in the actualising tendency and this is also hinted at with Rennie's approach with the client agency. ...read more.