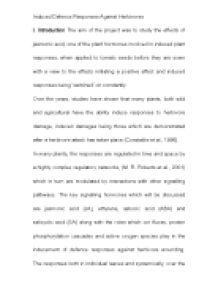 Induced defence responses against herbivores. The aim of the project was to study the effects of jasmonic acid, one of the plant hormones involved in induced plant responses, when applied to tomato seeds before they are sown

﻿Induced Defence Responses Against Herbivores I. Introduction The aim of the project was to study the effects of jasmonic acid, one of the plant hormones involved in induced plant responses, when applied to tomato seeds before they are sown with a view to the effects initiating a positive effect and induced responses being ?switched? on constantly. Over the years, studies have shown that many plants, both wild and agricultural have the ability induce responses to herbivore damage, induced damages being those which are demonstrated after a herbivore attack has taken place (Constable et al., 1996). In many plants, the responses are regulated in time and space by a highly complex regulatory networks, (M. R. Roberts et al., 2001) which in turn are modulated by interactions with other signalling pathways. The key signalling hormones which will be discussed are jasmonic acid (JA), ethylene, asbscic acid (ABA) and salicyclic acid (SA) along with the roles which ion fluxes, protein phosphorylation cascades and active oxygen species play in the inducement of defence responses against herbivore wounding. The responses both in individual leaves and systemically, over the unwounded areas of the plants will also be discussed. II. Response Overview When herbivore damage is sustained, the immediate surrounding areas around the wound will consist of different populations of cells. The wound site will consist of damaged cells which are beyond repair but which may also provide a key role in the initiation of an induced response as they will release signalling molecules which can act as elicitors of responses in the neighbouring intact cells or will act as defensive toxins which can cause damage or kill the attacking organism. ...read more.

The remaining eight mutants defined four loci, two of which were insensitive to systemin and lacked systemic wound response. The results confirmed the theory that prosystemin and systemin are both functional in the transduction of systemic induced resistance in the tomato plants and that wound expression is induced in 3 genes, Def-1, Spr-1 and Spr-2 (those insensitive to systemin) by the actions if wounding, systemin and 35S::prosys. Thaler in 1999 investigated the effects of JA as a natural elicitor to induce resistance to herbivores. Here, she applied jasmonic acid to the foliar regions of the plant and found that the application of JA increased levels of polyphenol oxidase. The plants which were induced received 60% less leaf damage than the control plants. Thaler also observed that although the plants which were treated produced less flowers, the fruit yield from the crop between the treatments. She also was that there was no difference between the yields of the induced plants and of the control plants under both natural control conditions and under reduced herbivore levels. Thaler concluded that the fact that there were no differences in yield was due to the low levels of herbivory experienced by the plants and that JA treatment produces a natural herbivore resistance at no cost to the tomato or its yield and this treatment could be of high value in agriculture, reducing the use of man-made pesticides, providing a cheap, natural alternative. Figure 2. This figure, taken from Thaler, (1999) ...read more.

The studies have shown that elicitors and wounding cause a rapid depolarisation in the plasma membranes electrical potential, driven by an efflux of K+, an influx of protons and the alkalinisation of the extracellular medium surrounding the wound site. When chemical agents which disrupt the fluxes are applied to the cells, a disruption of defence gene expression can be seen. An example by Messiaen in 1999 showed that when fusicoccin, a fungal toxin was applied, H+-ATPase was activated in the plasma membrane and the membrane becomes hyperpolarised, inhibiting the expression of the gene which expresses systemic wound inducement and glycan synthesis. In 1999 it was also shown by Schaller and Oecking that some wound response genes were activated with the application of, H+-ATPase inhibitors when there is no other wound/elicitor induced stimulus present. Calcium ions also play a casual role in the wound signalling pathway. Knight et al., 1993 gave evidence to show that following wounding there is a rapid increase in cytoplasmic Ca2+ concentrations, and when calcium channel blockers are applied to a wound site, and molecules which cause the mobilisation of intracellular Ca2+ stores, elicitor induced gene expression has been seen (Leon et al., 1998) The induced defence mechanisms of a plant are complex, with many signalling pathways and molecules involved in the inducement of defence genes, including various ions, plant hormones and even mutant genes. But most notably the effects of jasmonic acid when applied both externally or induced internally must be taken into account, as this, most studies show is the mainstay of induced plant defence mechanisms. IV. ...read more.